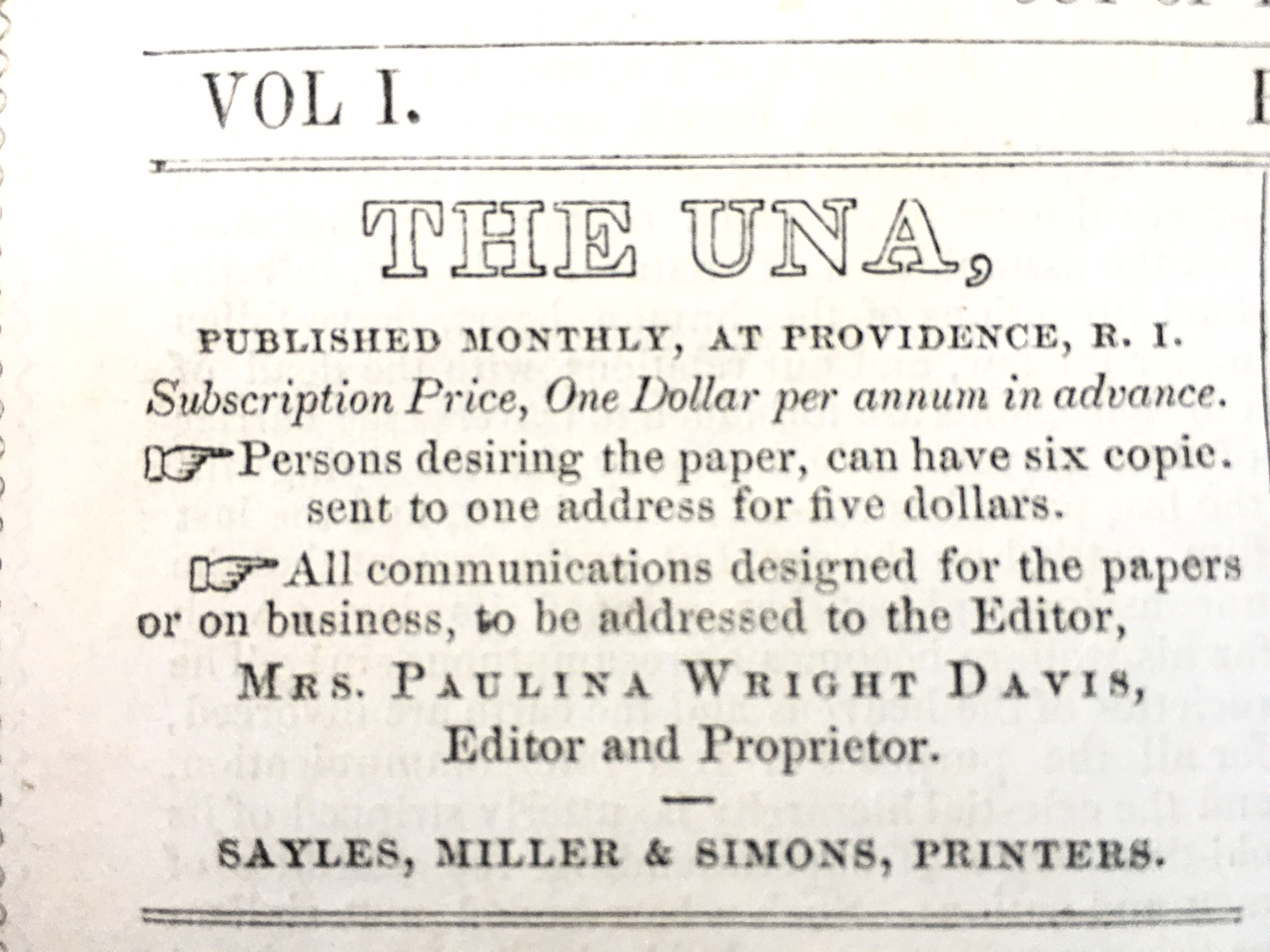 This is an excerpt from the first volume of the publication, The Una: A Paper Devoted to the Elevation of Women, Published in Rhode Island, it was one of the first periodicals of the American women’s rights movement. Its volumes can be found at the Rhode Island Historical Society’s Robinson Research Center.

The Una and the Early Life of Paulina Kellogg Wright Davis

Founded by Paulina Kellogg Wright Davis in 1853, The Una: A Paper Devoted to the Elevation of Women was one of the first periodicals of the American women’s rights movement. The Una was truly the first to be owned, edited, and published by a woman. The premier issue was released February 1, 1853, in Providence, Rhode Island. The publication moved to Boston with Caroline Healy Dall as a co-editor in 1855, and its last issue appeared on October 15 of that year. Although it did not have a long run, it was an intellectual powerhouse that documented the growth of the important woman’s suffrage movement.

Paulina Kellogg was born in 1813 to Captain Ebenezer and Polly Kellogg in Bloomfield, New York on Staten Island. She had one sister and three brothers. Her father served in the War of 1812. In 1817, her parents moved the family to a frontier piece of land near Niagara Falls in northwest New York. She later remembered this as an exciting time. But when both her parents died, she was sent at age seven to live with her strict aunt in nearby LeRoy, New York.

Instead of becoming a missionary, in 1833 she married Francis Wright, a young merchant from Utica, New York. The two had courted for five years and had very similar interests in political and social reform including temperance, abolition, and women’s rights. Together they helped organize an antislavery convention held in Utica, New York, in October 1835. As a result of their activities, their house was attacked by a violent mob, but they were unharmed.[1]

When her husband died in 1845, she continued to be active in reform work, and she travelled to give lectures on women’s health and hygiene. Dr. William Elder, editor of the Philadelphia Republic newspaper, wrote in 1846, “She is now one of the very few women in the United States who are technically acquainted with anatomy, physiology, and the general principles.”[2] This was very high praise at the time.

Her lecture tours led her through New England, including Rhode Island, where she met Thomas Davis, an Irish jewelry manufacturer and Democratic anti-slavery politician of Providence. In 1849, at age 35, Wright married Davis and they eventually adopted two daughters.[3] She lived in Providence area for the rest of her life, where her devoted work for woman’s rights and abolition carried on.

She took a leading role in organizing the first National Woman’s Rights Convention held in Worcester, Massachusetts, in October 1850. That same year she founded the Providence Physiology Society with a mission to teach sex education to women. She used anatomical French-made models of human bodies and detailed engravings to teach her peers: white middle to upper class women. Her intellectual network was wide, and she appreciated the power of submitting news to other publications. In 1851, she reported on the Providence Physiology Society in Walt Whitman’s New York City-based Water-Cure Journal and described that its library “numbers nearly or quite one hundred well-selected volumes.”

Her husband, Thomas Davis, served as a U.S. congressman for R.I. from 1853-1855 in Washington, D.C. She remained in Providence, where she launched The Una.  The periodical was the culmination of her life’s work and vision. Its subtitle read “A Paper Devoted to the Elevation of Women,” followed by the unattributed quote “Out of the great heart of nature we seek truth.”

The first issue was released February 1, 1853 and was 16 pages. Not quite as physically large as a newspaper, it had an ornate masthead and was printed by Sayles, Miller and Simons. The first two issues featured a prospectus under the masthead which described the intent and purpose of the publication. 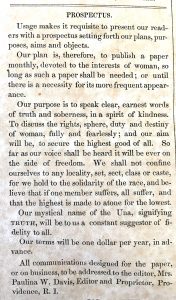 Davis’ printers were also publishers of local newspapers in Providence. William Jones Miller was a publisher of two Dorr Rebellion newspapers in 1842: Providence Daily Express and New Age. With Postmaster Welcome B. Sayles, he started the Providence Daily Post in 1850. Employed at that time in the office was Alexander P. Niger, the first African American man to be formally recognized as a printer in Providence and he was a charter member of the Providence Typographical Union.[4] In 1853 they were joined by Aaron Simons, when they absorbed the Republican Herald newspaper,[5] becoming the firm Sayles, Miller and Simons.

Submissions and letters of support flowed into Providence from local, national and international contacts. The first issue of The Una began with a feature article by Caroline Healey Dall (1822-1912) called “Long Lane; or, Recollections of Kittery [Maine], Long Ago.”  In the second issue, prominent Rhode Island lawyer and politician Wilkins Updike (1784-1867) submitted his subscription and was recognized by Davis for authoring a bill passed by the R.I. Legislature that gave married women the right to own property. She published highlights of the women’s rights causes that she gleaned from a vast network of other newspapers and magazines that she had access to through friends and subscriptions.

The July 1853 issue featured a poem by William Ellery Channing, a well-known poet from Boston, entitled “Swan Point”, sent in by Providence poet Sarah Helen Whitman.[6]  Channing had sent it to fellow poet Whitman: “It was written after a visit to the beautiful cemetery on the banks of the Seekonk, not far from the point of Roger Williams’ first landing.”[7] This gives a sense of Davis’ intellectual circle in Providence at the time.

The wider professional network she had built through her lectures, teaching and activism, was always close. The Una featured letters from supporters from around the United States and from around the world. There were active subscribers in Ireland and Liverpool, England. Notable correspondents included many abolitionists and social reformers such as Elizabeth Cady Stanton and Lucy Stone.

The Una’s advocacy did not stop at articles and letters. Davis featured advertisements in line with her causes, particularly for female doctors and women’s education. 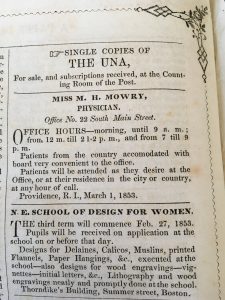 Mary Harris Mowry, M.D. (1818-1899) was a contemporary of Davis and advertised in The Una from its start. She was the first recognized woman physician in R.I. and lectured extensively at the Providence Physiology Society, serving as president for several years. Dr. Mowry spoke at the National Woman’s Rights Convention in 1850 and practiced medicine at 22 South Main St. in Providence from 1854-1880.[8]

After publishing and financially supporting the paper for two years, she offered the paper, its subscription list of supporters, and her continued labor to the leaders of the National Woman’s Rights Conventions. Their rejection of her offer was a profound disappointment for Davis and extended her disenchantment with that group.[9] Their rejection was the main cause of The Una’s downfall and the beginning of the organizational split of the Rhode Island Women’s Suffrage Association mentioned in the main essay of this chapter. Davis believed that The Una was “practical work” for the cause of women’s suffrage and empowerment.

Beginning with the January 1855 issue, the masthead read that The Una was published in Boston, Massachusetts and that all winter correspondence should be “addressed to the editor, Mrs. Paulina W. Davis, Washington D.C.” Presumably Davis had joined her husband during his term in Congress. In the February issue Caroline Healy Dall was listed as co-editor.

Davis was thrilled to garner Dall’s assistance and wrote in that same issue: “Almost unexpectedly to ourself a way has been opened to continue with the publication of The Una. Relieved of a portion of the severe labor that has overtaxed us both mentally and physically, we hail it with joy…” 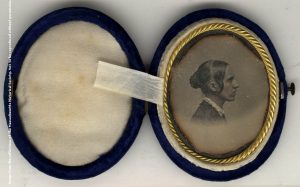 While Dall had been a contributor since the very first issue, she became more involved as a co-editor when the paper moved to Boston with publisher S.C. Hewitt. Dall had just returned to her hometown of Boston in 1854. Soon after, her husband abandoned her with two children to become a Unitarian missionary in Calcutta, India. Dall was left to support her family.[10] It is hard to say how this affected her work for The Una, but she did agree to take on the responsibilities that same year.

During this last year, The Una took on more types of commercial advertisements. It was probable even that revenue was not enough to keep the publication going. There was no announcement of its demise in the last issue. Publishing The Una was a midpoint in Paulina Kellogg Wright Davis’ career. She kept organizing, lecturing and supporting the cause of women’s rights for the rest of her life. She died in 1876 at age 63 and is buried at Swan Point Cemetery in Providence, R.I. 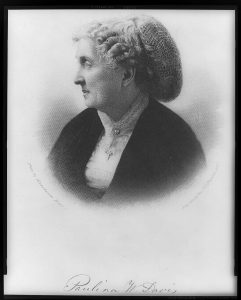 Courted – seeing each other before marriage. Dating with the intention of marriage

Temperance – against alcoholic drinks. Fighting for laws prohibiting the sale or drinking of alcohol

Abolition – against the institution of slavery. Fighting for laws prohibiting slavery

Publishers – the company that prepares printed works for sale

Advocacy – public support for a particular cause or policy

What made The Una special?

What was the purpose of The Una?

Davis believed that The Una was “practical work” for the cause of women’s suffrage and empowerment. What do you think she meant by that?

Do you think that Davis’ background in female physiology education impacted her work with The Una? Why or why not?

Next to Women Employees Playing Baseball