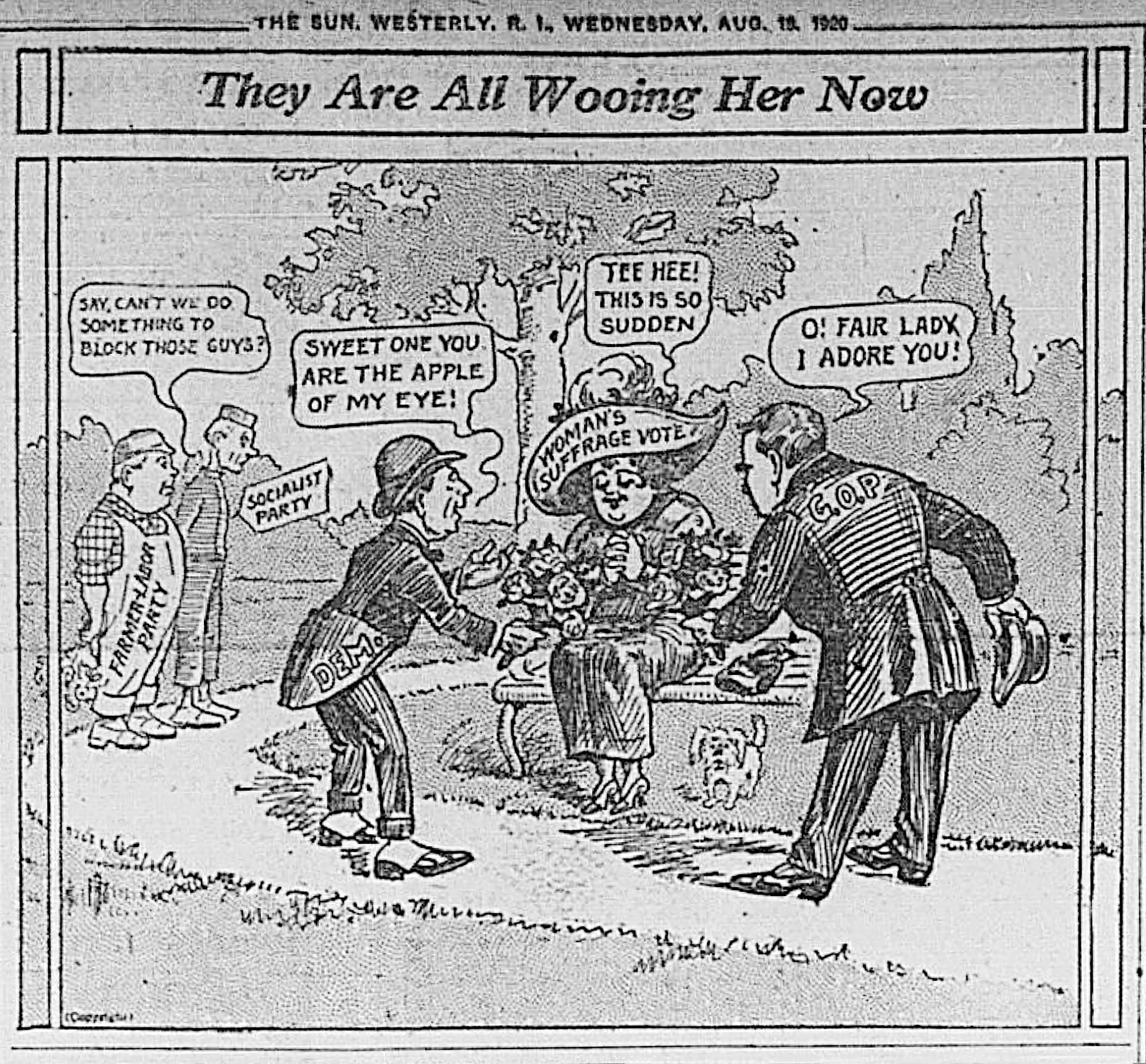 This political cartoon is from the Westerly Sun and was published on page 8 on August 18, 1920, when the 19th Amendment granting all American women the right to vote was finally passed.

Since the late 1800s, women’s suffrage activists in Rhode Island had been advocating for an amendment to the state constitution that would guarantee voting rights for women in Rhode Island. In the first decade of the 1900s, Rhode Island suffragists such as Sara Algeo and Mary E. Jackson instead joined in the increasingly strong national campaign for an amendment to the U.S. Constitution that would pass women’s suffrage nationwide. As a result of their and other suffragists’ activism, Congress passed the 19thAmendment in June 1919. Many state governments ratified the amendment soon after. The Rhode Island state government ratified the amendment on January 6, 1920, the first day the Rhode Island General Assembly was back in session.

Yet, by the summer of 1920, only 35 states had ratified the 19thAmendment, one state short of the required 36 states. In 1920, there were only 48 states in the U.S. (Alaska and Hawai’i did not become states until 1959), and therefore the 3/4 requirement meant that 36 state governments had to ratify.

That summer, Rhode Island suffragists watched nervously as the question of ratification came down to two states, Tennessee and North Carolina, which could be expected to vote either way on the 19thAmendment. Both states are in the South, which at that time was more unfriendly towards women’s suffrage than any other region of the United States.[4] Yet at least one of the two states would need to ratify the 19thAmendment in order for it to become official in time for the presidential election to be held in November 1920.

On August 18, 1920, readers of the Providence Journal read the headline, “Suffrage Defeated in North Carolina.”[5] The Pawtuxet Valley Daily Times reported that the North Carolina Senate postponed its vote on the 19th amendment until the next year, which meant that “North Carolina is eliminated at least for the present, from the fight for ratification of the Federal Woman’s Suffrage amendment.”[6]

Supporters of women’s suffrage now turned their attention to Tennessee, which the Providence Journal had called “virtually the last hope of the suffragists.”[7] The most active suffragists, who had been traveling to each state capital to advocate for women’s suffrage, went to the Tennessee State Capitol in Nashville. In order for the Tennessee government to ratify the 19thAmendment, both houses of the state legislature, state Senate and the state House of Representatives, would have to vote in favor. The Tennessee state Senate had already voted to ratify the 19thAmendment, and after the Tennessee House of Representatives’ first vote resulted in a tie, it was required to vote again.

Suffragists held protests at the Tennessee State Capitol and lobbied members of the state government to support women’s suffrage. The Speaker of the Tennessee House of Representatives, who was in charge of scheduling the voting, was a strong anti-suffragist. Believing there were enough members in the House of Representatives who would vote against ratification, he called a vote. When he cast his vote for the amendment, the Providence Evening News reported, he “voted ‘no’ in his loudest voice and the Antis cheered him for a minute.”[8]

Harry Burn, a 24-year-old state representative, had previously voted with the anti-suffragists.[9] But this time, he changed his vote. With this single vote in the Tennessee House of Representatives, the 19thAmendment was set to be ratified nationwide. The Providence Evening News reported that a “riotous scene broke once again as women kissed each other and some shed tears.”[10]

Opponents of women’s suffrage accused Burn of accepting bribes from suffragists, an accusation for which they had no proof. Burn said that what had actually changed his mind was a letter from his mother, Phoebe Burn, where she encouraged him to vote for the amendment, writing, “don’t forget to be a good boy.”[11] Anti-suffragists tried to find other ways to prevent the ratification. The Speaker of the Tennessee House threatened to hold a second vote, but in the following few days, he never did. Reporting on August 21, the Providence Journal guessed that this was because he did not have enough votes to change the decision.[12] An anti-suffragist judge in Tennessee tried to stop the Tennessee governor from signing the ratification, claiming that the 19thamendment was illegal because it went against Tennessee’s state constitution. But, this attempt failed as well. The Providence Journal noted that although many anti-suffragists were still extremely opposed to the new amendment, they decided that it would have happened sooner or later.[13]

As the news reached Rhode Island, supporters of the amendment reacted immediately. The Newport County Woman’s Republican Club, a women’s suffrage organization, held a celebration and published a statement thanking suffrage activists nationwide.[14] Ada Sawyer, who later became the first woman lawyer in Rhode Island, immediately applied to be a “notary public,” which is a person who is certified to sign legal documents in the United States.[15] Before gaining the right to vote, Sawyer had been ineligible to apply. The Providence Journal predicted that some women would now start running for public office. “Women candidates for the City Council,” the Journal wrote, “are among the probabilities of the coming campaign.”[16]

On August 19, the Pawtuxet Valley Daily Times wrote that “estimates as to the number affected are variously placed between twenty-two and twenty-five million women.”[17] The Woonsocket Call guessed higher, writing that a “total of 26,883,866 will be made eligible to vote in all elections.”[18]

Some suffragists in Rhode Island celebrated the victory as if there was no more work to be done. Sarah Doyle, an advocate for women attending college in Rhode Island, spoke about the victory that the 19th Amendment gave to women, but ignored the overwhelming majority of women who could not afford to go to college. “It is since the higher education of women became so universal that women awoke to the need of the ballot,” she told the Providence Journal in an interview.[19] Similarly, the Newport County Woman’s Republican Club also said that the 19th Amendment meant the “enfranchisement of all women.”[20] These statements show how some wealthy, white suffragists were mainly concerned with their own voting rights, not those of all women.

But other suffragists in Rhode Island recognized that they still had to work to make the promise of the 19thAmendment real for all women. At one reception, the suffragist Elizabeth Upham Yates “spoke of the need for educational and aggressive campaigning,” describing how new women voters would need to be active and educated public citizens.[21] In the Providence Evening News, journalists discussed how “victory has not been completely achieved” in Rhode Island because of laws that prevented people, including women, from voting in local elections if they did not own a certain amount of property.[22]

The promise of the 19th Amendment was not fully achieved in 1920. Though people were not denied the right to vote “on account of sex” any longer, women in some places were still denied suffrage on other accounts such as race, property ownership, or whether they had been convicted of a crime. Yet, the 19thAmendment was an important step in the continued effort to fully enfranchise all women. The Amendment’s clear language about not restricting citizens’ right to vote because of their “sex” also gave suffrage activists a tool to use in their continuing struggle.

Enfranchise – to give voting rights to

Ratify – to approve. In the context of amendments to the U.S. Constitution, ¾ of all state governments must ratify an amendment for it to become official.

From the quotes you read from Rhode Island newspapers in 1920, what opinion did the newspapers’ writers and editors seem to have about women’s suffrage?

Analyze the visual at the top of this essay. What is the title of the political cartoon? When and where was it published? Who does the artist depict? If needed, research the definitions “G.O.P.,” “Socialist Party,” and any other terms in the cartoon.

What is each figure’s opinion about women’s suffrage? Now look more closely at each figure’s clothing and body language. What do you think is the artist’s main point?

Next to Girls City Club Logo