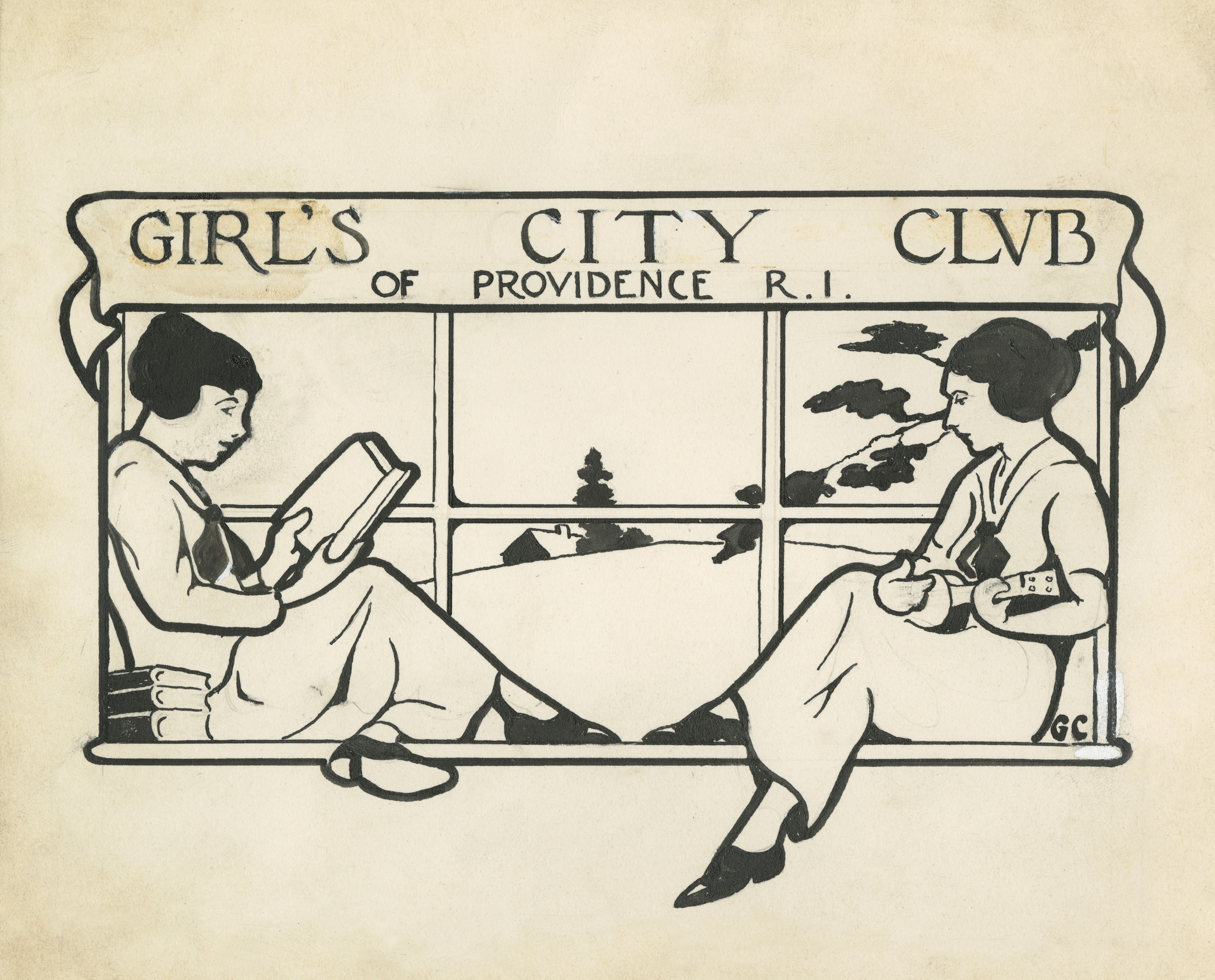 This is an image of the logo for the Girls City Club of Providence, one of the women’s social organizations formed in the 19th century out of recognition that many social and recreation spaces were available to boys and young men, but very few for young women outside of the home or school.

Essay by Michelle Chiles, Head of Archives and Special Collections at Providence College

The late nineteenth century saw an explosion of women’s organizations and social clubs. In the past, many women’s clubs were created to support long established men’s clubs and were less about the interests and influence of the women themselves. With a desire to impact more outside the home, these organizations gave women a space to participate in literary, artistic, and even political conversations at a time when they were not readily given space in spheres such as business and politics. Women wanted to participate in organizations that worked to improve society through charity, public education, safety in the workplace, women’s rights, health and sanitation, and many other issues facing society.

Two organizations that formed in Rhode Island during the early 1900s were the American Homemakers League and the Girls’ City Club. In name, these two organizations may sound like they were not concerned with politics or the well-being of their community, but in reality, both played vital roles in everything from war efforts on the home front to consumer advocacy.

The Providence Housewives League held their first meeting on September 27, 1912, with the intention to organize and educate housewives on the economics of the home, particularly in regard to fair prices and access to clean, quality food. Shortly after coming together, this Providence group voted to become the local branch of the National Housewives League and eventually became part of another national organization, the American Homemaker League. 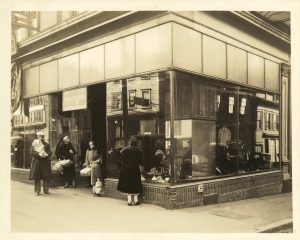 The League formed committees to investigate the sanitation of various food outlets such as bakeries, candy makers, soda fountains, and markets. Women inspected the shops and factories to record cleanliness, access to bathrooms, and sanitation efforts by the owners and staff. The women believed that an informed public would better be able to persuade shops to maintain healthy sanitation standards. Their reports included lists of shops that met standards as well as suggestions for improvement:

“Much of the candy sold is made of poor materials under dirty conditions. The League Hopes to help in securing a better grade to place on the market. Clerks in candy stores should not handle both candy and money.”[1] 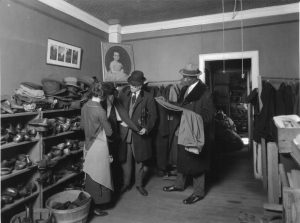 Committees were also formed to focus on the quality and fair pricing of milk and eggs.  According to the Providence Housewives League Report, 1914-1915, the shortage of fresh eggs and the correct labeling of fresh versus storage eggs were causes worth tackling. Due in part to these efforts, a new law went into effect on September 1, 1915, which required all eggs be labeled and priced accordingly.

The Providence Housewives League’s goal was to educate the consumer and promote closer relationships between the food producers and the consumers:

“Our work of investigation has shown us that one of the greatest needs is education of the consumer. We are constantly meeting evidences of this need in unintelligent buying – true of all classes…. By unintelligent buying or unintelligent consumption, I mean a tendency to be governed by taste or price rather than by quality or food value; a demand for produce out of season, when cheap seasonable things are in market; an insistence upon having certain things because we have always had them, though poor crops or war conditions has made them high priced…. We have on our farms in Rhode Island delicious eating apples for which there is no market because the consumer buys the expensive (handsome but tasteless) California fruit. Prejudice stands in the way of the utilization of many of our natural resources.”[2] 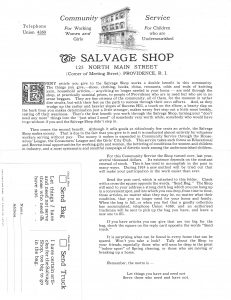 The Providence Housewives League played an important role in food conservation and preservation during World War I (1914-1918).

“As war conditions were affecting every household, the interest, co-operation and support of the community were desired. Therefore, fifty women representing various interests and organizations in the state were asked to form a sustaining committee to co-operate in developing and carrying into effect such plans as the smaller committee might initiate under the guidance of an expert in Home Economics.[3]

The Food Conservation Committee elected Mrs. Ida S. Harrington as their Education Director. Harrington’s resume was quite impressive, studying at Simmons College and then the College of Home Economics at Cornell University, which was then a department of the New York State College of Agriculture. The Food Committee held cooking demonstrations at The Outlet Company department store and the Public Market. The League brought in Miss Alice Bradley of Miss Farmer’s School of Cookery in Boston to teach the hugely successful series, with more than 1800 women in attendance over time. In addition to the cooking demonstrations, the Food Conservation Committee organized classes and lectures to promote smart food consumerism, preparation, and storage. The Providence Housewives League continued to play a useful role in consumer and home economics education for the duration of the war. In the winter of 1918, the League opened a War Bread Shop because “there seemed to be a real need of reaching the great mass of people with an explanation of the best way to use wheat substitutes which they must buy.”

Harrington continued to spread the league’s influence through other media outlets. Along with Eleanor K. Dearborn, Harrington hosted a weekly radio show to discuss household issues and cooking tips. The Providence Evening Bulletin also featured a column by Harrington titled “Helps for Homemakers” where she doled out more solutions for running an efficient home. This was particularly popular as the country was in the midst of the Great Depression. When the Second World War broke out, the League took their place and headed many initiatives on the home front once again. Rallying for food conservation efforts such as war time gardens and other resource saving solutions during a difficult time, the group remained active in Rhode Island until 1946. 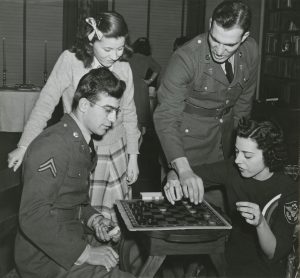 The Girls City Club of Providence was founded in 1920 out of recognition that many social and recreation spaces were available to boys and young men, but very few were available to young women outside of the home or school. Following in the footsteps of earlier women’s clubs established for cultural, social, and civic engagement, the GCC was formed to “Promote good fellowship among girls, developing their social, educational, and recreational opportunities and increasing their power and opportunities for service through the medium of non-sectarian and self-governing organization.”[4]

The club was open to any young woman over the age of 17 who were unmarried and never divorced. Activities ranged from sewing and etiquette classes, dancing, theatre performances, lectures, and book talks. Sports and weekend outings were also very popular with the members. In 1941, the Girls’ City Club of Providence was asked to host social events for the 6th Army Corps that was stationed in the city. Shortly after that, the navy arrived at Quonset Point. Without a USO in Providence, the Girls’ City Club again took up hosting duties. The club maintained a tradition of programs, dances, and outings with men serving in the military. Men serving overseas or in other parts of the United States wrote numerous letters to members of the club. This went on throughout World War II and the Vietnam war.

In additional to social activities, the club also joined forces with the American Homemakers League to run a charity shop in downtown Providence. With dwindling membership and a meeting space designated for demolition, the club could not sustain the energy necessary to continue. On March 8, 1970 the club closed after 50 years of service. 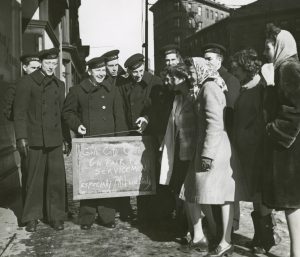 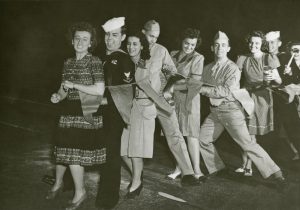 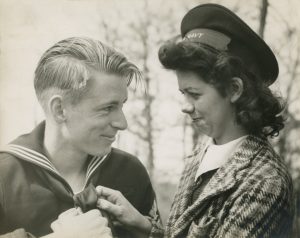 Sanitation: Having and using clean water and proper disposal of waste to maintain health

Consumer advocacy: Protecting the interests of the buyer of products

USO: United Service Organization. An organization that provides entertainment to members of the United States armed forces and their families

What were the goals of the women’s organizations in the struggle for women suffrage?  What did the two organizations mentioned in this essay accomplish?

Research one or two more women’s organizations either in Rhode Island or other areas. What were the goals of those organizations?  Who were the members?

Next to Bertha Higgins's House