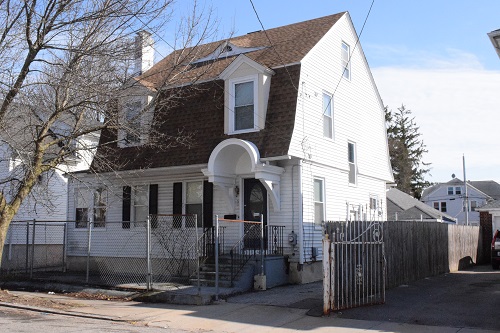 This is a recent image of the house that Bertha Higgins once lived in located in East Providence. The image was photographed in 2019 by The Public Archaeology Laboratory, Inc. as part of a project funded by the National Park Service documenting 20th century African heritage civil rights people, places, and events. Bertha Higgins’ house was identified as important to document because it is a place associated with her and her work advocating for black women’s rights. The Rhode Island Historical Society, the Rhode Island Black Heritage Society, and the Rhode Island Historical Preservation and Heritage Commission were partners on this project.

Though Rhode Island’s population of black women was a small minority in the early 1900s, the largest women’s organization in the state to publicly support women’s suffrage was the Union of Colored Women’s Clubs. One of the reasons these Black women’s groups were so influential in the women’s suffrage movement was the work of dedicated organizers like Bertha Higgins. Higgins was a black suffragist and civil rights advocate in Providence in the early 1900s.

Bertha Higgins was born Bertha Dillard in Virginia in 1872. Her parents lived on a farm and most likely worked as sharecroppers. After Bertha Dillard’s first husband died in 1897, she married William Higgins, who was training to be a doctor in New York. In 1903, the Higgins couple moved to Providence. It was only then, when Bertha Higgins was already in her 30s, that she became an activist.[1]

Black women, like white women, were not able to vote in Rhode Island until 1920. In the early 1900s, women around the United States were advocating for their right to vote. Most black women, though, struggled to make themselves heard in the women’s suffrage movement. Many of the large, national, women’s suffrage organizations were run by white women who only supported voting rights for themselves and did not allow black women to join their organizations. For instance, the majority-white National American Woman Suffrage Association made black suffragists march separately in its parades.[2] Other white suffragists said they supported black women’s voting rights as an idea but decided not to advocate for black women’s suffrage because they thought it would be politically unsuccessful.

Even organizations where black women and white women worked together for universal women’s suffrage did not focus much on black women’s specific voting rights concerns.[3] This worried many black woman suffragists who knew that even black men, who were legally allowed to vote, were often kept from actually voting because of racist state and local laws, such as poll taxes and property-owning requirements.[4] Black women knew that even if they got the legal right to vote, they would also have to deal with the restrictions that kept black people from gaining political power.

Bertha Higgins became particularly active in the women’s suffrage movement in the 1910s. Although women’s suffrage movements had existed for a long time and had won women the right to vote in some places, the early 1900s were the time that the movement started gaining energy on a national level. Bertha Higgins participated both in black women’s organizations and in multiracial ones that were mainly composed of white women.[6] Higgins’ day-to-day work consisted of public speaking events, meetings with other activists, and fundraising events. Higgins also used more creative methods, such as a musical performance  she organized with an organization for young black women called the Twentieth Century Art and Literary Club. The performance raised awareness and money for the women’s suffrage movement.[7]

In 1920, the 19th Amendment to the Constitution legalized women’s suffrage in the United States. While for white women, the struggle to secure voting rights was now over, black women’s struggle continued. As black suffragists predicted, many state and local governments took steps to prevent black men and women from voting. Many of these problems would not begin to be alleviated until the Voting Rights Act of 1965.

Although we usually think of the South as having the worst black civil rights in the United States, Providence was also a very segregated city where black people were treated poorly. Black voters in Rhode Island did not have as many challenges in voting and getting their votes counted as in other states, though, and Bertha Higgins recognized that black voters would need to use their new political power to make change in Rhode Island. Black women voters were a crucial part of this effort. As soon as women’s suffrage was passed, Higgins proudly noted that “Mrs. Parker, one of our race, was the second to register” to vote in Rhode Island.[8] Higgins encouraged voters to elect politicians who would pass laws that would benefit black people.[9] At a meeting in 1930, Higgins tried to get a candidate for the Rhode Island State Senate to agree to work towards a civil rights bill in Rhode Island in exchange for receiving black voters’ support[10]

Bertha Higgins was initially a Republican, as were most black voters in the United States at the time. The Republican party, initially the anti-slavery party under Abraham Lincoln and then the party supporting black civil rights in the Reconstruction period after the Civil War, was historically a stronger advocate for black Americans than the Democratic party was. In the early 1920s and 1930s, though, this alignment changed in Providence as black voters grew frustrated with Republicans’ lack of action on civil rights. Black Providence citizens decided that Democrats’ policies, such as job appointments to black people and help for black churches, offered better opportunities than Republicans’ policies did.[11]

Bertha Higgins was part of this change. She became a Democrat in the 1920s and used her influence in local black organizations to encourage other voters to join her. Bertha Higgins endorsed candidates for political office, and many black voters listened to her advice on how they should vote.[12] By the 1930s, most black voters in Providence were Democrats, a trend that has continued in Rhode Island and in the United States to the present day. After Higgins became an active Democrat, she decided to only support Democratic candidates who worked toward black civil rights.[13]

Higgins continued advocating for social justice through the end of her life. She died in 1944, leaving behind groups of women activists committed to political change and a daughter, Prudence Irving, who fought for black civil rights in Providence in the decades that followed.[15]

Supporters of women’s suffrage understood that the right to vote was more than just the ability to submit a ballot.  It also helped people more fully participate in public life. Bertha Higgins did much of her activism in people’s houses, since as a woman and a black person, she often wasn’t allowed to speak in public places like political buildings, theaters, and restaurants.[16] Bertha Higgins’ house is still standing today, on a residential street in the West End of Providence . The West End was one of two neighborhoods where black people lived when Bertha Higgins was alive, and it is still mostly populated by people of color. If you visit Bertha Higgins’ house, you can imagine how Higgins might have stood on her porch as she welcomed fellow activists to meetings and chatted with them as they left. Due to women like Bertha Higgins, there are many more places, other than private homes, where black women can meet and lead.

Suffragist – a person advocating for more people to have the right to vote, particularly women

Advocate – a person who fights for a particular cause

Sharecropping –  an unfair economic situation where many formerly enslaved people, though free, worked on former plantations for very low pay because they could not afford to go anywhere else

Endorse – to encourage other people to vote for a particular candidate

Why did black woman suffragists form their own organizations?

What were some of black women’s specific voting rights concerns?

Do you think that white women suffragists who only advocated for white women’s right to vote could claim to support universal women’s suffrage if they did not fight for it?

Historians do not know why Bertha Higgins only became an activist after she moved to Providence. Do you have any ideas why this might be?

Why is the right to vote so important?