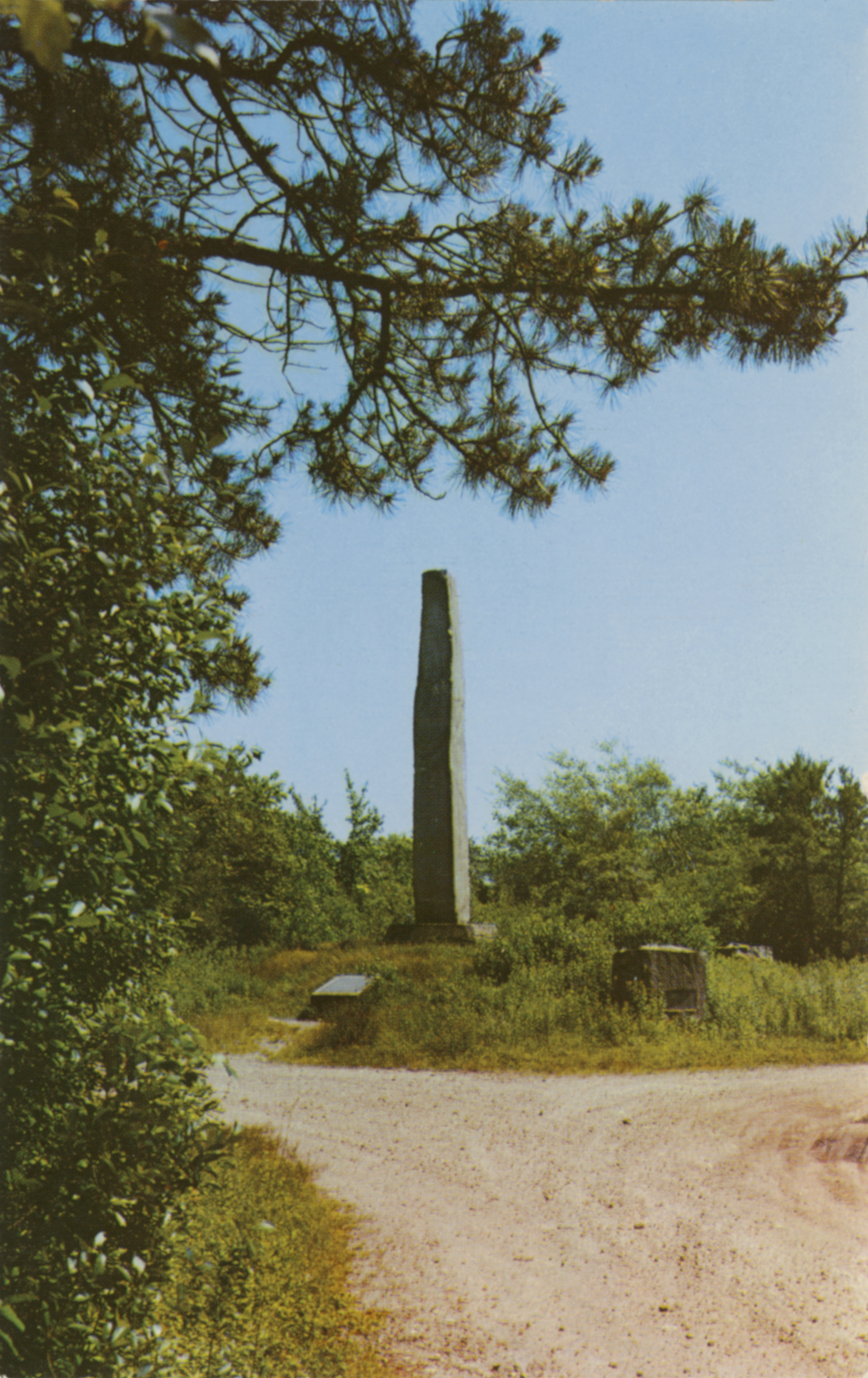 The Monument at the Great Swamp

This is an undated color postcard image of the monument located in West Kingston, Rhode Island. The monument consists of a granite obelisk surrounded by four granite markers naming the four colonies that partook in the event. The inscription reads, “Attacked within their fort upon this island the Narragansett Indians made their last stand in King Philip’s War and were crushed by the united forces of the Massachusetts Connecticut and Plymouth Colonies in the ‘Great Swamp Fight’ Sunday 19 December 1675.”

Remembering the Massacre at the Great Swamp

On the cold and snowy day of December 19, 1675, a group of more than a thousand English soldiers, along with about 150 Pequot and Mohegan soldiers, attacked the Narragansett town and fort in what is now South Kingstown. Up until this event, the Narragansett people chosen to remain neutral during Philip’s War. However, English colonists suspected that the Narragansett people had been harboring Wampanoag men who fought alongside Metacomet. The Narragansett built a town deep in a swamp, as many Native American nations were doing during times of war for safety and protection. An Indian guide led the colonial army of the United Colonies of New England to the town. There, the soldiers found hundreds of wigwams and longhouses and upwards of three thousand Narragansett, including women and children. The Narragansett had also stored most of their food for the winter in the swamp. The English did not consider the fort to be a town filled with innocent bystanders. To them, it was a fortification and the inhabitants were participants in the war. Thus, the English soldiers set the homes on fire. As the wigwams burned, many Narragansett climbed over the palisade, or fence that surrounded the town, only to find English soldiers on the other side waiting to shoot them. Approximately 200-500 Narragansett died during the battle, and many more died as they fled through the snow with little food. Some managed to escape to other villages of the Narragansett and Niantic peoples.

Although Native people understood the events in the swamp as a “massacre,” English colonists and their descendants remembered it only as a “fight.” In the ensuing years, English writers failed to recognize they had violated their own rules for war. Soldiers were supposed to adhere to a moral code that governed their actions during times of war. They were not supposed to burn homes or towns, or drive away innocent women and children. Soldiers and writers used their own ideas about the differences between Native and English people to justify their actions. To the English, the burning of the wigwams in the swamp was permissible because they did not view wigwams as proper houses, nor did they view Indigenous peoples as equals. Neither did they recognize the fort as a town, nor the inhabitants as innocent bystanders.

In 1906, Rhode Islanders of European ancestry, members of the Society of Colonial Wars, and a handful of Narragansett people gathered to put up a memorial to the event, and to transfer the land over to the Rhode Island Historical Society. As they gathered, one white Rhode Islander, Roland Hazard, gave a speech commemorating the bravery of British soldiers and of the Narragansett men who fought that day. The day’s speeches given that day also remembered the now ‘vanquished’ Narragansett who, despite brave efforts to fight against the colonial army, were now gone from the swamp. In an attempt to demonstrate that the descendants of English colonists and the remaining Narragansett were finally at peace with each other, the leader of the ceremony asked the Narragansett men to uncover the monument. However, the leaders of the ceremony that day failed to realize that the Narragansett people did not remember that battle as a noble fight between two equally matched sets of soldiers. To the Narragansett, it was indeed a massacre in which women and children, seeking asylum, were butchered by an army. In the 1930s, a long-time Narragansett and Wampanoag elder, scholar, and descendant of King Philip, Princess Red Wing, began an annual commemoration at the site that carries on to this day. Participants of the annual ceremony reflect on the past, the present, and the future of the Narragansett people and the sacrifices of those who came before.

Wigwam: Seasonal dome-shaped homes made of tree saplings and covered in bark or reed matting. Also known as Wetu.

Fortification: A defensive wall built to strengthen a place against attack

Asylum: protection granted to a person fleeing danger from another place

Why did the Narragansett decide to build a town in a swamp?

Why did the English attack this town?

Think about the reception for the new monument at the Great Swamp in 1906. Why do you think there was misunderstanding between white Rhode Islanders and Narragansetts at the ceremony? What does this tell us about how we remember history?

Next to Anne Hutchinson Reconsidered