Back to Chapter Index Back to Essay: Rhode Island, Slavery, and the Slave Trade 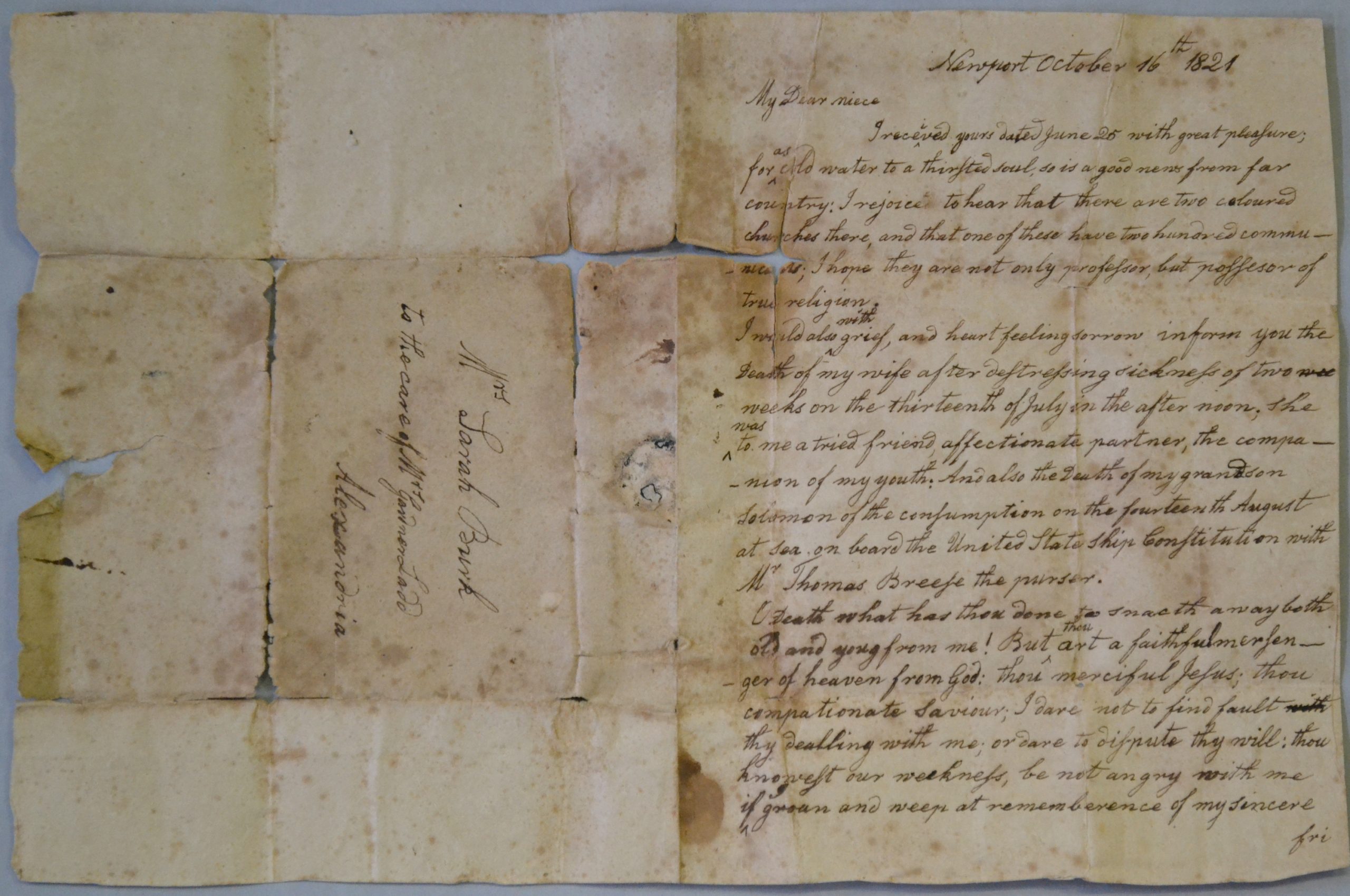 This image shows a page from a letter written by Newport Gardner to his niece, Mrs. Sarah Burk, on October 16, 1821. In it, Newport Gardner discusses the “coloured churches” near Mrs. Burk and tells her of the deaths of his wife and grandson, and his thankfulness that one of his sons was moving back from New York.

In the late-18th century, the passing of manumission laws did not stop the trade of enslaved people. In fact, they were mostly ignored. As many as 216 ships ended their voyages at a Rhode Island trading port and more than 20,000 enslaved people were traded between the years 1750 and 1800.[1] Among the enslaved people who arrived  in Rhode Island was Newport Gardner, originally named Occramer Marycoo. Despite his forced migration to the colonies, and his continued enslavement in the newly formed United States of America, Newport Gardner managed to make a place for himself and his family. He believed in making the lives of those around him better, and as a leader he made his victories serve to the benefit of those in his community.

Born around 1746, likely in Sierra Leone, Occramer Marycoo[2] was forced across the Atlantic in 1761 aboard the sloop Prince George, under the captain David Lindsay.[3] At fourteen years old, Marycoo was brought to the colonies and sold to Caleb Gardner, a ship captain and merchant in Newport, Rhode Island. Caleb Gardner gave Marycoo the new name of Newport Gardner.[4] It was a common practice for enslavers to rename the people they owned to further emphasize both the relationship of owner to property and the subjugation of the enslaved. Enslavers often gave the enslaved their surnames and a first name based on the place where they lived.[5]

There is no way to know for sure what native language Occramer Marycoo would have spoken. The most commonly used languages in the Gold Coast region of west Africa where he embarked were Mende and Temne. Within a few years of living in Rhode Island, Gardner spoke both English and French in addition to his native language. A gifted student, he also learned to read, write, sing, and compose music. It is believed that he learned music from Andrew Law beginning in 1784, after Sarah Gardner, Caleb’s wife, arranged it.[6] Around 1778, Newport married an enslaved woman named Limas, and they had 13 children between 1778 and 1800.[7] 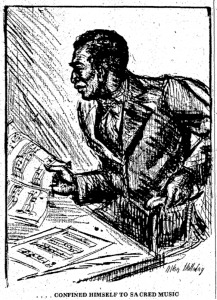 Eventually, Newport Gardner was allowed to open his own music school, and keep some of the profits, which he saved in an attempt to free himself and his family.[8] The school was located on Division Street in Newport, in a neighborhood that was mostly Black. There he both taught and composed music. While none of his music survives under his own name, a few songs have been attributed to him – Crooked shanks, Newport Assembly, and Promise.[9] Newport Gardner’s school attracted many students, and this success allowed him to become more active in the growing Free-African Community in Newport, Rhode Island. Although it would still be a number of years before he could secure the freedom of himself and his family.

In 1780, the African Union Society was formed by Africans in Newport, Rhode Island[10], possibly the first mutual aid society for people of color established in the newly forming American republic. The purpose of this Society was to provide benefits that were otherwise denied to Black people because of racial discrimination against the growing free Black population in communities across the state. These important efforts included records of births and deaths, apprenticeship opportunities, and care for the sick, elderly, and widowed.[11] In addition to being an aid organization, the society also began investing in a possible relocation and the establishment of a community in Africa. While that was an unpopular plan for the majority of free Black people, the goal of traveling to Africa mirrored Newport Gardner’s own desires to return home.[12] While membership was restricted to free Africans, Newport Gardner was an early supporter of the group despite still being enslaved. He attended meetings, took notes, and recorded the births of his children. He was even given an honorary membership in 1789 with the promise of full membership once he was free.[13]

In 1791, Newport Gardner and a small group of enslaved Africans in Newport bought a lottery ticket. The group won $2,000 to split amongst themselves. Unfortunately, it still was not enough to purchase the freedom of the entire Gardner family.[14] Some scholars believe that Caleb Gardner released the enslaved Gardner family upon learning of Newport’s longing to be free.[15] However, it is more likely that Caleb Gardner released them for other reasons, for instance the expensive requirement to feed, dress, and house all of the people he enslaved. By this time, Newport and Limas Gardner already had eight children and their family was still growing. Freeing the enslaved Gardner family likely saved Caleb Gardner more upkeep costs than the aging Newport Gardner would have contributed in equivalent labor to the household.[16] Another possible reason for manumission was the growing antislavery sentiment in Rhode Island. Rhode Island banned the importation of enslaved people in 1778, passed the Gradual Emancipation Act in 1784, and in 1787 passed a law banning Rhode Islanders from participating in the slave trade anywhere. [17] Finally, his manumission could have been a result of the public debate between John Brown and his brother  Moses Brown in Rhode Island newspapers in 1789 about the morality and legality of slavery. The debate turned into action the following year. In 1790, John Brown was charged with having an enslaved person aboard a slaving ship, breaking the 1778 and 1787 laws. The charges were dropped when John Brown agreed to free the involved enslaved person.[18]

The 1820s marked a new and final period of Newport Gardner’s life. His wife, Limas Gardner, and his grandson, Solomon, died in 1821. While he grieved deeply for his loss, he still remained active in his community.[20] Newport Gardner helped establish the Colored Union Church and Society in 1824, and was named deacon.[21] Despite this, and perhaps due to a belief that the only way to achieve true freedom and equality was to leave the United States, he began making plans to return to Africa.[22] Funded by the newly organized American Colonization Society, Newport Gardner, along with one of his sons and other members of the African Benevolent Society members, traveled to Boston, where they planned a voyage to a new colony on the west coast of Africa. In a letter dated January 2, 1826, Newport Gardner wrote to a friend that his trip had been postponed a few days but was ready to set sail.[23] At least 40 people set sail on January 4, 1826 on the Brig Vine. The voyage lasted about five weeks, landing successfully in February, 1826. Unfortunately, many on board the ship had no immunity to the illnesses in their new home and by April, 1826, most of the group became sick and died, including Newport Gardner and his son.[24]

Newport Gardner lived a life to which many enslaved people aspired. Despite being forced into slavery and sent to a new country, Newport Gardner overcame those hardships and managed to free himself and his family. More importantly, he recognized that others faced similar barriers, and chose to serve as a community leader to help those around him.

Manumission: a release from enslavement

Sloop: a smaller sailing ship with only one mast

Gold Coast: a region on the west coast of African (now a part of the country Ghana) named after one of the main exports

Mutual Aid Society: an organization that provides benefits or other help to its members when they are affected by things such as death, sickness, disability, old age, or unemployment

Apprenticeship: the position of an apprentice, a person who is learning a trade from a skilled employer, who has agreed to work for a fixed period at low wages in exchange for training

Importation: the bringing of goods or services into a country from abroad for sale

Gradual Emancipation Act of 1784: according to this act, children born to enslaved parents would not remain enslaved and enslavers could manumit enslaved people that were healthy and between the ages of 21 and 40 without assuming financial responsibility. It was meant to slowly phase out slavery

John Brown (1736-1803): a Rhode Island merchant, who supported slavery and the slave trade even after it was outlawed. He was active in the American Revolution and served in the U.S. House of Representatives from 1799-1801

Moses Brown (1738-1836): a Rhode Island industrialist, he helped fund the American Industrial Revolution. While he was a supporter of the slave trade in his early life, he converted to Quakerism in 1774 and became an active abolitionist after

Deacon: a non-ordained person who is appointed or elected to assist the minister in Protestant churches

African Colonization Society: founded in 1816 to encourage and support the voluntary migration of free African Americans to the continent of Africa, helped found the colony Liberia in 1822, which officially became a country in 1862

What were the benefits of joining a mutual aid society? Why would Newport Gardner be so enthusiastic about joining?

Why is it more likely that Caleb Gardner released Newport Gardner and his family for reasons other than granting Newport’s wish?

Why would some Free-Africans and African-Americans want to leave the United States? Why would Newport Gardner think he couldn’t achieve real freedom?