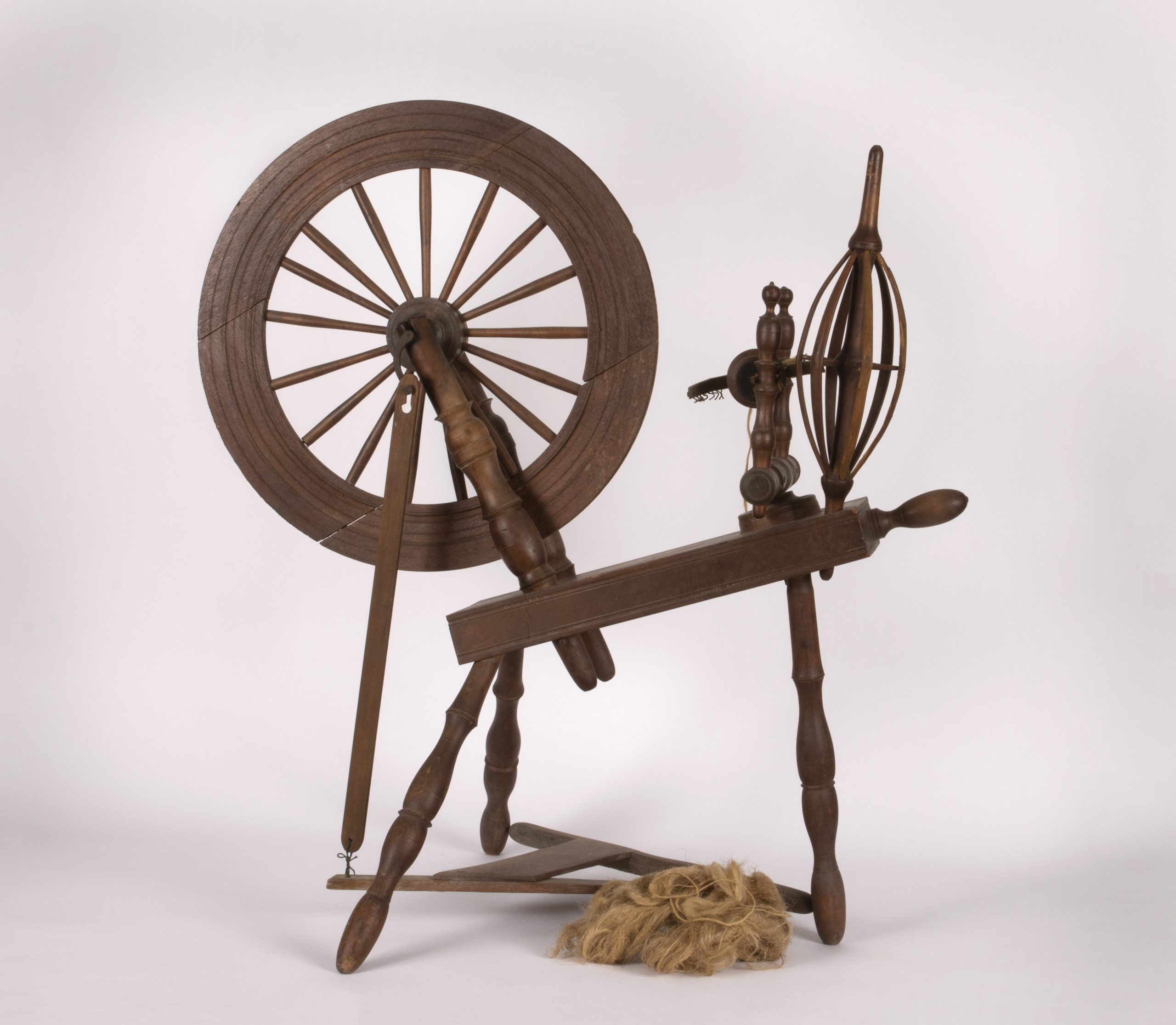 When we think about the colonial American past, many people assume that Americans knew how to grow and make everything that they owned. In reality, many American colonists imported things from Great Britain in the eighteenth century, including cloth, ceramics, and tea. Since these goods arrived by ship, they were most readily available to buy in port cities like Boston and Newport. However, by mid-century, merchants increasingly sold imported goods in backcountry areas as well.[1] Many colonists were proud of their British identity and liked to own and wear fine British things. Yet, when tensions grew between the American colonies and Great Britain, the decision to buy or to not buy British goods became a way to express political identity. Read below to find out how old clothes and homespun textiles became powerful political symbols a decade before the Revolutionary War.

Essay by Rebecca Marisseau, Ph.D. Candidate in the Department of History at Brown University

One day during the spring of 1766, twenty young women in Bristol, Rhode Island gathered together to spend the day spinning yarn.[2] At first, this might seem pretty unremarkable. Yet, by spinning yarn, these women made public political statements in protest of the laws of Great Britain. Further, these women claimed for themselves an important, if unofficial, political role that colonial American women had never known before.[3]

A year before the women collected to spin yarn, the British Parliament passed the Stamp Act. The Stamp Act required American colonists to pay a tax on all sorts of printed paper that they used, including pamphlets, newspapers, marriage licenses, business papers, and even playing cards. The act got its name because an official stamp on the paper certified that the tax had been paid. Parliament passed the Stamp Act to help pay for the presence of British troops in the American colonies, which had been maintained since the conclusion of the French and Indian War to protect Britain’s hard-won victories. American colonists were not thrilled to be paying the new tax. However, what offended many of them more than the tax itself was that Parliament decided to tax the colonies without their consent, meaning that the colonists were unable to elect their own officials to represent them in Parliament. Besides the Sugar Act of 1764, the British Parliament had never seriously tried to tax the colonies before, and colonists only paid taxes mandated by their colonial assemblies. The Stamp Act brought into question the rights of American colonists as British subjects because many Americans felt it was their right as subjects to only be taxed by an assembly in which they had elected representatives. The British government and its supporters argued that the American colonists were virtually represented because Parliament represented all British people, but many Americans rejected this idea and felt they were being treated as inferior subjects. To these and other acts of the 1760s, many colonists chanted: “taxation without representation is tyranny.”

Sometimes, American colonists met the Stamp Act with violent resistance. In Newport, for instance, protesters rioted for three days, during which they destroyed the houses of two men for supporting the Stamp Act and caused Newport’s stamp distributor to resign.[4]

However, colonists also opted for more peaceful strategies, including the adoption of non-importation agreements against British goods and the encouragement of homespun  clothing. The strategy went like this. In the mid-eighteenth century, American colonists imported a great deal from Great Britain, including things like textiles and ceramics. People who disliked the Stamp Act hoped that if Americans stopped buying things from Great Britain, then British exporters would lose business and pressure Parliament to repeal, or cancel, the Stamp Act. Therefore, opponents of the Stamp Act asked Americans not to buy things from Great Britain and to instead use old things or make their own.

This is where the women who gathered to spin yarn in Bristol come in. At the time, women were commonly regarded as keepers of the household, and their role included purchasing and making things for the home.[5] Therefore, in order for the non-importation strategy to work, opponents of the Stamp Act needed women’s support for the movement.[6] By spinning yarn rather than buying yarn imported from Great Britain, the women of Bristol crafted symbols of their opposition to the Stamp Act. At the spinning event, the women joined male opponents of the Stamp Act for dinner, though they omitted British tea from the meal, of course. Women in other cities across the American colonies participated in similar spinning events, including in Newport where 92 women gathered in the town meeting house, and in Providence where women met at the invitation of Doctor Ephraim Brown and declared that “the Stamp Act was unconstitutional, [and] that they would purchase no more British Manufactures unless it be repealed.”[7] We know of these events because they were reported in local newspapers. Sometimes, reports referred to these women as “Daughters of Liberty.” These events likely did more to reinforce women’s traditional roles in the home than change them, but they did give women an unprecedented political voice at a time when women could not hold public office.

Significantly, homespun events and nonimportation agreements tied everyone’s personal, everyday market choices to ideals of public sacrifice and political statement.[8] Simple things like what someone wore became powerful symbols of what they believed. Clothes became such important political tools that when Benjamin Franklin appeared before the British House of Commons to speak about American resistance to the Stamp Act, he reported that while it used to be the pride of Americans to indulge in the manufactures of Great Britain, it was now their pride “To wear their old cloaths over again, till they can make new ones.”[9] Importantly, some historians argue that these market strategies provided a common experience across the American colonies, and that this common experience served as a foundation for united rebellion a decade later.[10]

In 1766, a reluctant British Parliament finally agreed to repeal the Stamp Act. However, Parliament also passed the Declaratory Act, which affirmed Parliament’s full power over the colonies in future cases. In the end, none of the colonists’ grievances were solved, setting the stage for future conflict. Although the Revolutionary War did not begin until a decade after the issuance of the Stamp Act, the Stamp Act and other acts from the 1760s continued to weigh on the minds of American colonists well into the revolution. After all, one of the colonists’ grievances against the British Crown listed in the Declaration of Independence was “For imposing Taxes on us without our Consent.”[11]

Tax: a charge imposed by a government to raise money for public purpose

French and Indian War (1754-1763): a war fought between the British, the French, and their Native American allies over territory in North America. This conflict is viewed as one part of a larger global war between all the major powers of Europe called the “Seven Years’ War.” Great Britain defeated France, and in the Treaty of Paris of 1763, France gave up much of its holdings in North America, including Canada. Following the war, Great Britain decided to continue to maintain a military presence in North America to protect its hard-won victories

Sugar Act (1764): among other things, the Sugar Act enforced taxes on sugar imported from non-British producers in the West Indies. Parliament passed the Sugar Act to curb American smuggling and to raise money to pay the debt of the Seven Years’ War

Resign: to voluntarily leave a job or position

Homespun: cloth or yarn made at home rather than purchased from outside the home

Imported: goods brought into a country or region for sale

Public office: a position in government

House of Commons: a house within the British Parliament

Why did many Americans find the Stamp Act offensive?

What could be so revolutionary about spinning yarn?

In what ways did the Stamp Act Crisis help shape or set the stage for the American Revolution a decade later?

Next to Newport Gazette - Loyalist Newspaper