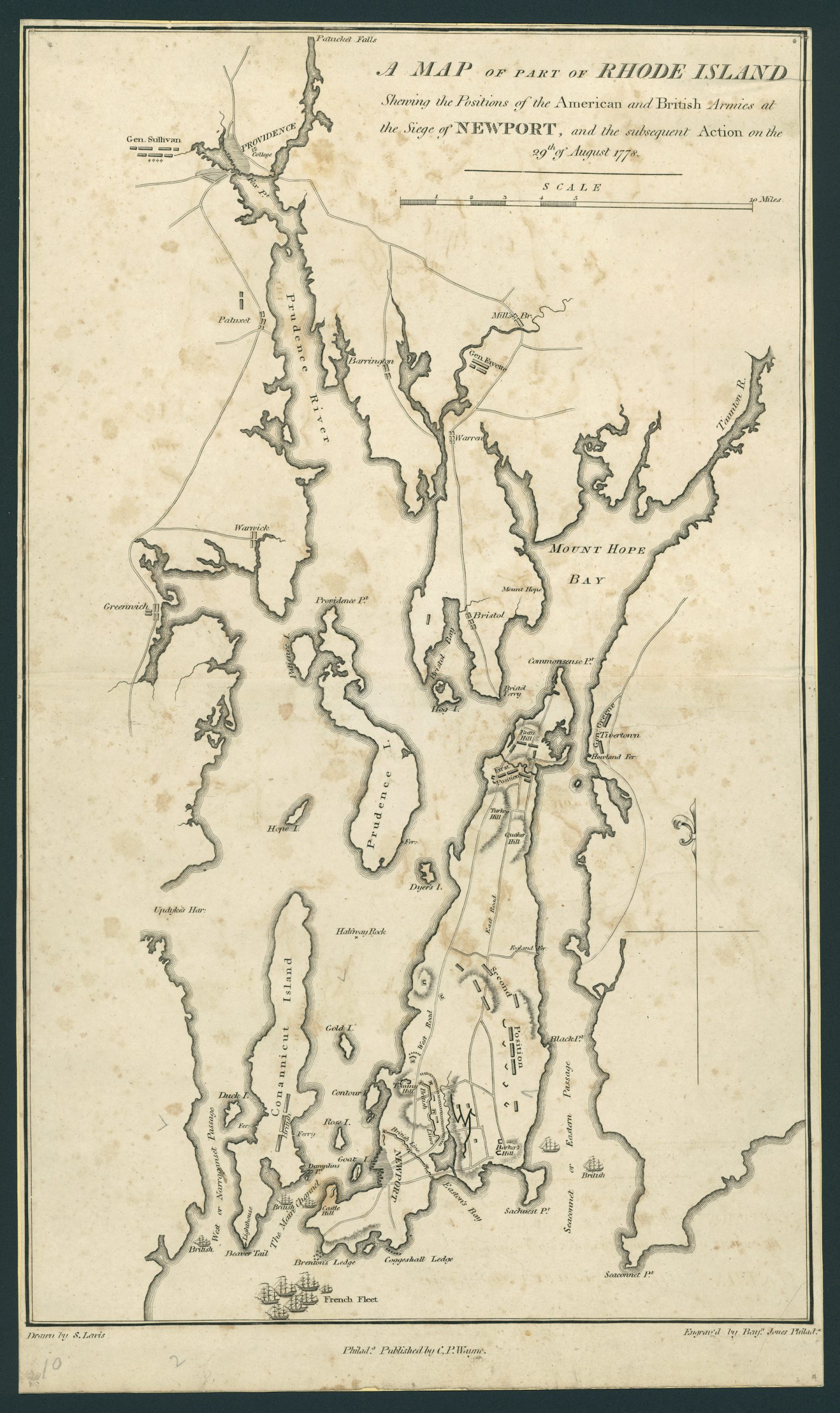 Map of the Siege of Newport

The bottom portion of this map depicts the positions of the American and British Armies during the Siege of Newport and the subsequent action on the 29th of August 1778.

Rhode Island was founded as a refuge by various religious dissenters seeking the freedom to worship their beliefs. The Charter of 1663 granted Rhode Island official recognition and legitimacy. It also allowed for complete freedom of worship without government interference, and granted unprecedented self- governing powers. In an instant, Rhode Island became the most democratic place in the British speaking world.[1]

This exceptional freedom allowed the people of the colony to spend their energy on economic pursuits. Starting in the early 1700s, as the boundaries of the colony were stabilized and more roads, bridges, and ferries were built to facilitate the delivery of marketable products to seaports, Rhode Island bore some of the most prosperous and enterprising merchants in the American colonies. They engaged in a diversified commerce along both sides of the Atlantic Ocean. It was a place where anyone could conduct business and prosper.[2]

The most successful and notorious of these efforts was the Triangular trade—the cycle of acquiring molasses in the West Indies to distill into rum in Rhode Island for the purchase of enslaved people in Africa to transport back to the West Indies. Rum was the currency of the slave trade and Newport was the epicenter of the rum trade in America.[3] 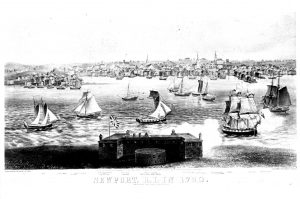 This wealth translated into political power and Newport dominated the colony in this regard, too, as most of the early governors from 1663 to 1755 came from that city. By 1750, Providence emerged as a rival as its merchants tried to copy the same formula which had led to Newport’s success. Four of the Providence-based Brown brothers, Nicholas, Joseph, John and Moses, provided the financial backing for the astute and popular politician Stephen Hopkins as he captured 9 out of 13 elections for the governorship during the 1750s and 60s.[4]

However, in terms of economic wealth, there was really no contest. Providence may have been the capital of the colony, but Newport was its undisputed leader. By 1760, Newport was the fifth largest town in British North America and there was no reason to doubt that it would continue to thrive. Yet, within twenty years, as home markets began to replace foreign markets and the economy turned inward, Newport’s status would be turned upside down and Providence would stand alone as the center of the newly independent state of Rhode Island.[5]

In 1763, Great Britain had finally achieved a major victory over its arch rival France. Under the terms of the Treaty of Paris, it had won a large empire in North America (all of Canada and all of the French-held territory east of the Mississippi, except for New Orleans) but at a great cost, and needed to replenish its treasury. With the approval of the newly crowned King George III, his ministers looked for ways to raise revenue. Their strategies would have a severe impact upon the merchants of Rhode Island.[6]

The Sugar Act of 1764 was an attempt to revive the Molasses Act of 1733. The Molasses Act was passed so customs agents could inspect cargo on incoming vessels and collect a fee if they were carrying molasses, sugar, or rum. The British, like most of the European powers, had colonies across the globe. These colonies were to ship their raw materials for free within the empire, with the understanding that they were to go to the mother country of England. There, they were to be made into finished goods and these goods, ideally, were to be sold back to the colonies. This system was referred to as Mercantilism but, in practice, there were many holes owing to a lack of enforcement.[7]

The rum traders could buy molasses from French colonies for half the price paid to the British planters. Since it was a foreign product, in theory, there was a tax fee to be paid to the customs agents when the vessels arrived at Newport. The colonial merchants saw no need to obey the law, and either ignored the law, bribed or bullied the officials, or smuggled the cargo to a remote spot in Narragansett Bay to unload without paying any fees. This had been going on for years and the merchants weren’t about to change now.[8]

Determined to enforce the law and to deter smugglers, the British started to send naval warships to Rhode Island even before the law was to take effect. The vessels would provide military strength to support the customs agents and discourage any illegal activity. In this case, they made a serious miscalculation. For decades, the colonies had been left to their own devices and didn’t want any interference. Both sides refused to consider any compromise and as more incidents occurred they often escalated into violence.[9]

During the 1760s, there were numerous confrontations between the crowds of Newport and the crews from the British ships that caused destruction of property. In one instance there was an outbreak of uncontrolled mob violence where three prominent Loyalists were driven to seek refuge on a British ship while the crowd ransacked and looted their homes.[10] 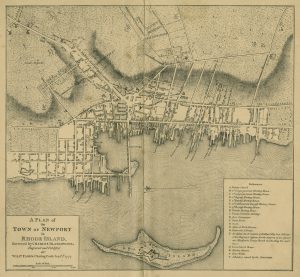 This struggle reached a climax with the burning of the British schooner Gaspee in 1772 led by men from Providence, not Newport, under John Brown and Abraham Whipple. After a lengthy inquiry whereby no one was found guilty through lack of adequate evidence, the British were infuriated and decided to tighten their grip on the colony. Captain James Wallace and the frigate Rose, a very powerful warship, were sent to patrol Narragansett Bay. He stopped just about every boat he encountered and took any provisions that he wanted from the boats or the farms without payment. Up to 2,000 residents evacuated Newport and sought refuge in Providence.[11]

When the British evacuated Boston in early 1776, Captain Wallace, also left. This permitted several of the merchants, especially in Providence, to outfit their vessels as privateers, and for most of the year they were able to enjoy the profits. A Newport minister claimed that the privateers were so successful that they doubled the value of the town of Providence, but it was still a fraction of the value of Newport.[12]

On December 8, 1776 , a British fleet transporting an army of British and Hessian soldiers appeared off Newport and came ashore uncontested. For the next three years, Newport would suffer a foreign occupation, crippling its economy. The town itself had been evenly split between the loyalists and the patriots. The only patriots left in town were too poor to leave and would have to endure the deteriorating conditions.  Some merchants were relieved with the arrival of the troops. They were not willing to take the final step and cut their ties with England but had just wanted to protect their livelihood. There were a few patriot merchants who switched their allegiance in order to save their business.[13] 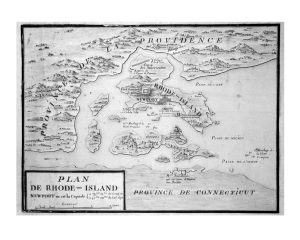 After the Americans tried and failed to oust the British in the summer of 1778, conditions deteriorated as the occupation dragged on and all trade and business came to a virtual halt. With the maritime trade decimated, the other trades in town that contributed to outfitting the vessels for a voyage suffered as well. Unemployment was wide-spread and with so many men idle, it was feared that there could be a complete breakdown of law and order.[14]

The British took whatever that they wanted from the town and the surrounding countryside. Public buildings were used by the army as barracks, stables, hospitals and officers’ clubs. Private homes were seized for the officers, and those known to be owned by patriots or were vacant were torn down. Food and fuel were in short supply, and the British always took what they needed first. With their naval presence, the British could raid and pillage towns and farms along the bay.[15]

In contrast, Providence was spared the horrors of war because it was located so far up on the bay that the British warships were unable to attempt an attack. Providence was a staging area and became an armed camp for the patriots. Although its vessels were blocked from trading, goods could still travel overland. Even so, there were shortages, especially with the added military presence and the refugees from the British occupied territory.[16]

The British finally left Newport and Rhode Island in October of 1779. Close to 500 houses had been destroyed and there were not any trees visible within five miles of the harbor. The damage was estimated at over $600,000 in property value. In addition, half of Newport’s infrastructure was destroyed.[17] Newport’s trade was almost non- existent. In 1774, 140 vessels had sailed from the harbor and there were 21 distilleries. By 1782, there were only six vessels that sailed and there were no distilleries left.[18]

Newport was able to resurrect itself to pre- war levels by 1790. The merchants returned and were able to reestablish their maritime success by utilizing their old networks of trading connections. They went back to what they knew best and proved that they could still make a profit, even if it was marginal. However, they were unable to readjust to the changing times.  The dawn of the Industrial Revolution started in Rhode Island but would never find a footing in Newport. Fast moving rivers were required to supply the power necessary to run mill machinery, and there were simply no rivers around Newport to power mills like there were in the northern parts of the state. They could only rely on maritime commerce for their livelihood, which was negatively affected by national polices, namely the Embargo of 1807 and the War of 1812.[19] [20] [21]

The decline of Newport during the war was an opportunity for Providence. With the dawn of a new century in 1800, transportation technology would change the playing field. Canals, steam ships and railroads could move goods faster and cheaper than sailing ships. The merchants of Providence would transform the city into the economic center of the state by 1820.[22]

Customs: duties or taxes imposed by a government on imported or exported goods. Also a government agency in charge of collecting these duties

Smuggle: to bring into or take out of a country secretly under illegal conditions or without paying the required import or export duty

Loyalists: a colonist who was loyal to the British government during the American Revolution

Schooner: a ship with two or more masts, rigged fore and aft

Outfit: to furnish or equip

Privateer: a privately owned and manned armed ship commissioned by a government to attack and capture enemy ships

Hessians: German troops fighting on the side of the British

Patriot: a colonist who supported the creation of a nation independent from Britain

Pillage: act of plundering, to loot

Infrastructure: the basic installations and facilities on which the continuance and growth of a community, state depends upon; such as roads, docks, wharves, warehouses, etc.

Embargo of 1807: a response from President Thomas Jefferson for violations committed by the British and French to American trading ships, the embargo banned exports from American ports and limited imports. It was very unpopular with the American merchants, especially in New England

What do you think about the fact that Rhode Island was founded on the basis of religious freedom for everyone and yet no other individual freedoms were granted to enslaved people, the sale of whom made RI merchants very wealthy? Does this sound hypocritical to you? Why or why not?

This essay notes that some patriot merchants in Newport switched their allegiances to save their business. Think about how hard of a decision that must have been to decide between their livelihood or their belief system. How would you go about making a decision like that? What factors would you consider?