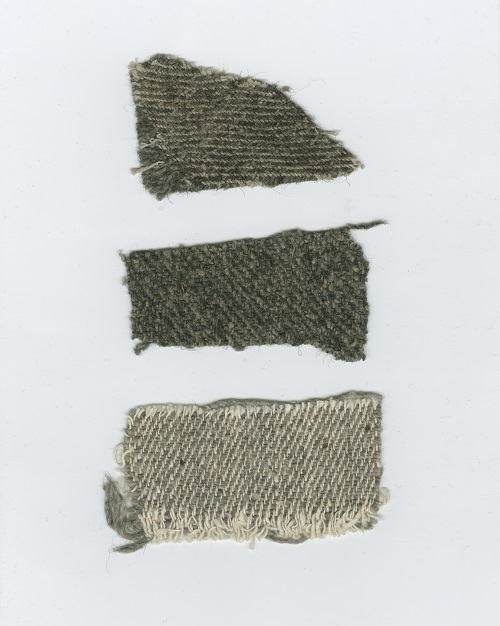 These fabric samples are examples of coarse fabric manufactured at one the Hazard’s mills in Rhode Island. Coarse and uncomfortable fabrics were specifically produced to make clothing for enslaved people and worked as a way to mark people as enslaved. The Hazards actively pursued the market for slave clothing, sometimes even buying overpriced raw materials from an influential slaveholder in order to secure a contract to clothe his enslaved workers.

Clothing as a Symbol of Bondage

Essay by Talya Housman, PhD Candidate in the Department of History at Brown University

Rhode Island is frequently remembered as being the first state to outlaw imports of enslaved people with a bill introduced to the Rhode Island Assembly in 1774. However, Rhode Island’s relationship with slavery was more complicated than this. For one thing, a “Gradual Emancipation” law passed in February 1784 only freed enslaved people born after March 1, 1784 when they reached adulthood. In addition, many Rhode Island merchants continued to participate in the slave trade, even if the enslaved people weren’t brought into the state of Rhode Island.

One of Rhode Island’s largest contributions to the slave trade was in industry – most enslaved people wore clothes made in Rhode Island. “Negro cloth” and “slave cloth” served as imprecise blanket terms to cover clothing for enslaved people which included fabrics like Osnaburg, homespun, linsey-woolsey, broadcloth, and kersey. These fabrics were united in their purpose to not only clothe enslaved people, but to mark people as enslaved. The Hazard family was prominent in this market and ran a small woolen mill in Peace Dale whose major export was coarse cloths, like linsey-woolsey, to be made into slave clothing. [1] Rowland G. Hazard served as the agent for the company marketing these fabrics to plantation owners in places like Louisiana and Alabama. The Hazards actively pursued the market for slave clothing, sometimes even buying overpriced raw materials from an influential slaveholder in order to secure a contract to clothe his enslaved workers.

In a letter to his brother Isaac Peace Hazard, Rowland reports on his visit with plantation owners to sell them negro cloth and it includes fabric samples. Surviving examples of slave clothing are incredibly rare. Most slave owners gave out clothing (or fabric to make clothing) twice a year. The clothing was uncomfortable, cheap, and disposable. Enslaved people usually wore their clothes until they were in tatters and then used the remains in quilts. Museums struggle to find examples of slave cloths despite wanting to in hopes of illuminating more about the lives of enslaved workers in the United States. [2] [Click to view Rowland Hazard’s entire letter with typed transcription] 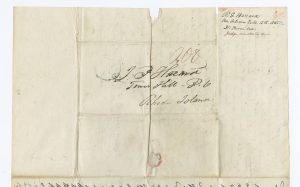 Today, these clothes may help tell historical stories, but to many enslaved people, they were an ever-present reminder of their bondage. Harriet Jacobs vividly remembered the coarse woven dress she received every winter while enslaved in North Carolina and “how [she] hated it! It was one of the badges of slavery.” [3] 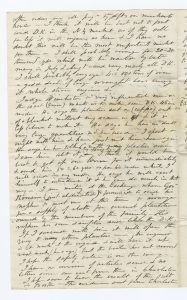 Rowland Hazard, like much of Rhode Island, had a complex relationship with slavery. Though he had close personal and professional ties with slaveholders, Rowland worked on behalf of free blacks who had been kidnapped and sold into slavery. He even successfully freed some of them. After being elected to the Rhode Island House of Representatives, Rowland opposed the 1850 Fugitive Slave Law, proclaiming: “My own convictions are that it [slavery] is the worst existing form of society for all concerned.” [4]

Despite Rowland’s efforts to defend the liberty of free blacks and forceful statements against slavery, he continued to profit from the sales of slave clothing and did nothing to oppose the continued existence of slavery as an institution in the South. In fact, in the very speech where he condemned slavery as the “worst existing form of society,” he defended the right of Southern states to their own self-governance, safe from Northern interference. Rowland only opposed the insistence that Northerners enforce Southern laws.

Rowland G. Hazard represents the convoluted relationship of Rhode Island to slavery. In many ways, the state was a trailblazer in abolition and fighting for the rights of enslaved people. Yet Rhode Island not only supported the slave trade, the modern industry and economy of Rhode Island was dependent on it.[5] Many of the key families in Rhode Island history—the Browns, the Hazards, and the Davises—all had key stakes in slavery despite the participation of many individuals from these families in the abolitionist movement. The story of the Hazards and “slave cloth” forces us to confront the important reality that how we earn and spend our money in places might benefit causes opposed to our beliefs.

Plantation: A large estate or farm that can rely on a large labor force.  In some cases, this force was made up of enslaved or low-paid laborers

Emancipation: The fact or process of being set free from legal, social, or political restrictions; liberation

Abolition: The act of ending a system or institution.  In this case, ending slavery

Why do you think a coarse type of cloth was chosen to make clothing for enslaved people?

Why was Rhode Island’s relationship with the emancipation of enslaved people so complicated?

Look up and define the word complicit. Why were northern textile factory owners complicit in supporting slavery even if they did not own enslaved people?

Next to Workers' Strike