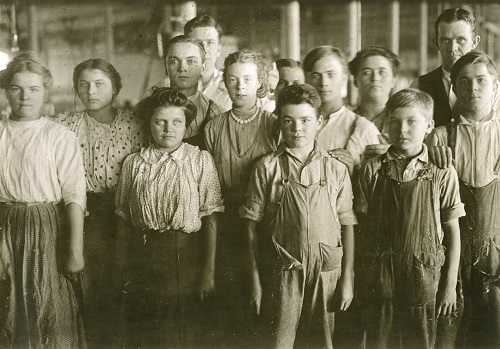 This is a photograph of a group of children posed in a mill building in 1912 taken by Lewis Hine. Child labor was common practice throughout much of the industrial revolution because many families needed additional income and children’s small fingers and bodies were optimal for fitting into small places and caring for machinery. The practice of child labor existed until the Fair Labor Standards Act was passed in 1938.

Industrialization and the Need for Child Labor

With the rise in urban manufacturing jobs across America, the use of child labor became commonplace. Initially, the idea of child labor was not only accepted, but encouraged as good for the children. Yet, as the nineteenth century wore on, the negative effects of child labor were increasingly visible. Children were living into adulthood and attending school less, while working at all hours of the day for very low wages. The abolition of child labor finally came towards the middle of the twentieth century, but it was quite the winding and exhausting route to follow.

In the late 1700s, Samuel Slater built the first American textile mill and employed a most curious group of workers: children. 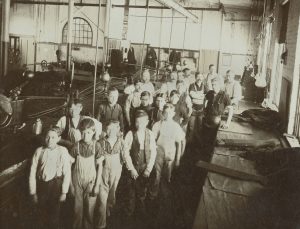 Modeling his mill after the Arkwright plans he had memorized before leaving England, there was a process of periodically changing spools on the machines, which Slater thought would be a perfect task for children’s small bodies and flexible fingers. While this may be shocking to readers, the use of child employees was “introduced by Slater and his Quaker associates with untroubled conscience.”[1] It was not only common but expected for children to help with farm chores. And, as the labor needs moved from farm to mill, the expectation for children to work carried over. The founders of the earliest colonies “considered children mini-adults,”[2] and believed that work brought everyone closer to God and taught one about hard work and integrity.[3] This resulted in Slater realizing that if he tried to employ families as a unit, he would be providing more jobs to the families who have many mouths to feed but would also help the children in societal expectations for labor. “Slater developed the method of advertising in newspapers for entire families to work in his mills, men from the fields, women from the homes, children as young as nine or ten years of age.”[4]

The employment of families as units is when the exploitation of children truly begins to appear. Families were larger during this time, and often with all the children working, they would bring home a significant amount of money. For example, in one family, “the children brought home $2.30 each week; their father only made $2.72 in the same time. The children’s effort almost doubled the family income, which reached $240 for the year.”[5]

These children, as mentioned earlier, were expected to work as hard as adults as well. They would be utilized for their small size to crawl and fix a jam in the mill machinery or used for their tiny fingers to thread machine needles, often leading to extreme injury. If one got injured on the job, they were often taken off the floor, but were not allowed to continue working if the injury was too drastic. This would leave a family without an additional income, while also leaving a child without a purpose. By the time an injury would occur, many children were so far behind in their education that it was almost impossible to catch up. Thus, many children were halted in their progress as an individual, whether that be through labor or through education. Here lies the truly abusive nature of child labor that caused people to change their minds on the practice.

Even though the children were providing tremendous help to their family units, many were working full time and did not attend school. Many adults would work extensive hours by our current standards, and children were no exception. The hours included not only long days during the week, but the weekends as well. Pauline Newman, a former child laborer, explained her experience as such:

“We…toiled from seventy and eighty hours a week! Saturdays and Sundays included!…A sign would go up on Saturday afternoon: ‘If you don’t come in on Sunday, you need not come in on Monday.’ Children’s hopes trampled upon-children’s dreams of a day-off shattered. We wept, for after all, we were only children.”[6] 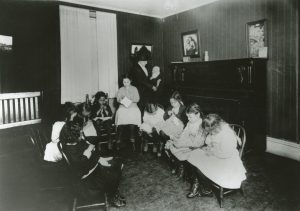 Children became weak, weary, and sick from the extensive hours spent hunched over work in cramped and congested mills. The health risks in addition to the lack of education, led some to worry about the children and the future generations of the United States.

Social activists of the middle and upper classes took on the campaign to end child labor abuses, and Lewis Hines presented the misfortunes in captivating photographs. He traveled around the Northeast, documenting all sorts of child labor including mill girls hunched over a loom and newsboys working past midnight. He was able to slowly publish these photographs (some of which were taken in Rhode Island), and Americans started to find fault in the system. Small organizations began writing petitions to end child labor or raised funds to donate to families in order to keep the youngest children from having to work. The Rhode Island Women’s Club was one of the most active societies that argued against child labor, but it would still be several decades before the campaign proved successful.

Child labor reform was a controversial and lengthy process. Although some states passed laws concerning the hours or jobs a child could work, there was still a lot of regulation needed to result positively for the children.  Due to the extreme poverty of many immigrant families, the abolition of child labor was scary for immigrant parents because they would rather have their children work all day than starve to death because they could not provide for them. This attitude started to change when labor unions began to lobby for the rights of workers as a whole and made it more feasible for families to survive while sending their children to school.

The United States Congress tried to pass two bills (one in 1918 and one in 1922), but both were found unconstitutional by the Supreme Court.[7] In 1924, Congress proposed an amendment to the Constitution regarding child labor, but the states refused to ratify it. Finally, in 1938, the Fair Labor Standards Act was passed, and the abuses of child labor were severely restricted. This act was revolutionary to the labor industry; it created a “ceiling on hours and a floor on wages,”[8] so that adults as well as children could not be overworked and underpaid as well as establishing a maximum work week for interstate employees, half-pay for any overtime work, and most importantly abolished child labor. Specifically, the Act set a minimum age for all employment at sixteen, but was set to eighteen for work considered hazardous; children between fourteen and fifteen years old were able to work after school hours as long as it was non-manufacturing or non-hazardous work.[9] The Fair Labor Standards Act, along with compulsory education laws being passed at the same time, created an environment that encouraged children to learn instead of toil in mills all day for meager wages.

With the revolution against child labor, children began to be seen less like “mini-adults” and more towards having extended childhoods, which included learning in schools and playing outside. Although working on farms was expected, it was completely different from the labor children were subjected to in stuffy and dangerous mills. As the abuses grew, activists such as Lewis Hines and local groups focused on protecting children from the dangers of labor. After many trials and errors, child labor was officially outlawed in 1938 and children were given a chance at a brighter future.

Exploitation: The action or fact of treating someone unfairly in order to benefit from their work

Reform: Make changes to an institution or practice in order to make it better

Regulation: A rule or directive made and maintained by an authority

Why did Samuel Slater think it would be a good idea to employ child laborers?

What were the consequences of a child being hurt while working in a factory?

What actions did some people take to try to stop child labor?

How would you feel if, instead of going to school, you had to work in a dangerous mill all day? How do you think the child laborers felt?