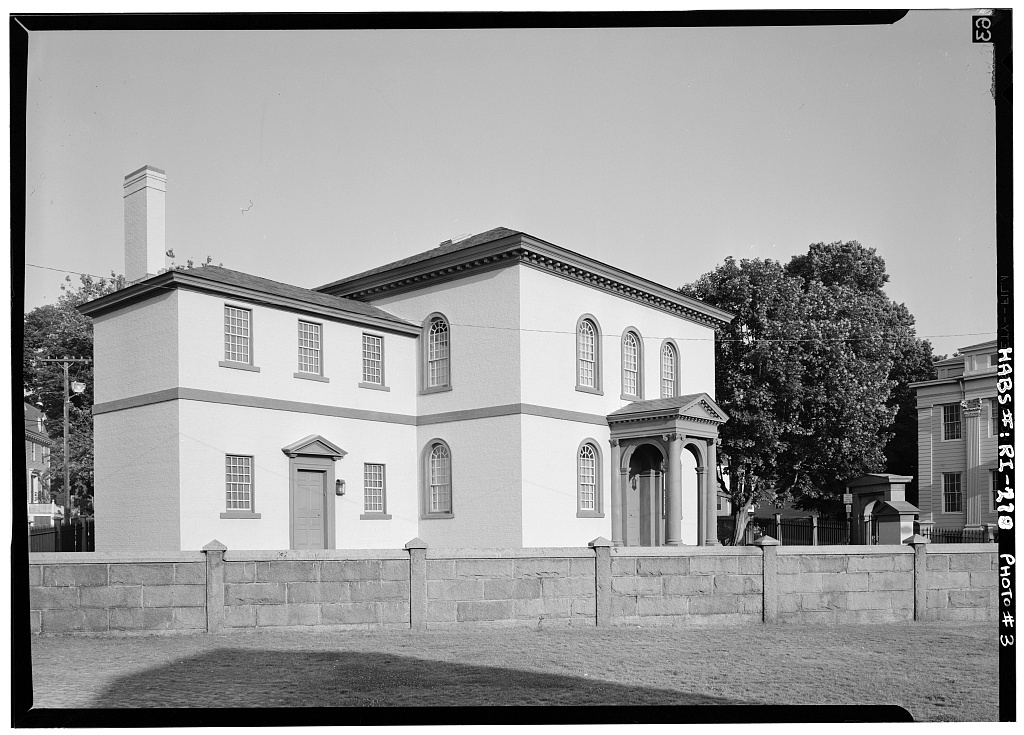 Touro Synagogue is the oldest surviving synagogue in North America. It was built between 1759 and 1763 in Newport, RI and was started by a congregation of immigrants drawn to the colony of Rhode Island because of its dedication to religious freedom.

Built between 1759 and 1763, Touro Synagogue, located in Newport, Rhode Island, is the oldest surviving synagogue in North America. The group that built Touro Synagogue was called Congregation Yashuat Israel and the congregation was founded in 1658. The people who founded this group were Sephardic Jews born in the Netherlands. The people of Congregation Yashuat Israel had ancestors who escaped religious persecution in Spain and Portugal.[1] They came to Rhode Island for a reason – they knew of Rhode Island’s long history of religious freedom and tolerance.

As written about in “Roger Williams and the Founding of Rhode Island,” Roger Williams was forced to flee the Puritan Massachusetts Bay Colony in 1635 because of disagreements with Puritan leaders on the role of religion within government. In search of a safe place to call home, Williams settled at a place he would name Providence.[2] In his treatise called The Bloudy Tenent of Persecution for Cause of Conscience, he wrote that “it is the will and command of God that (since the coming of his Son the Lord Jesus) a permission of the most pagan, Jewish, Turkish or Antichristian consciences and worships be granted to all men in all nations and countries.”[3] This was an important declaration. When many of the Puritans in Massachusetts Bay considered it their duty to convert all non-believers to their religion, Roger Williams called for the toleration of a range of religions in what would become the Colony of Rhode Island and Providence Plantations. He believed it was possible for people of differing belief systems to live harmoniously together in a single society.[4]

In the early 1630s, a large Spanish-Portuguese Jewish population, fleeing religious persecutions, established itself in Recife, in what is today Brazil, a Dutch colonial territory. The Jewish population in both Spain and Portugal were in danger as Catholicism became the required religion of all subjects of the monarchy.  Dutch territories were safe places for Jews as the Netherlands had no such requirements. Settling in a Dutch colony meant they would be able to freely practice their religion. Unfortunately, after a long-standing conflict, the Dutch lost their Brazilian territories to Portugal in 1654, meaning that the Jewish population there was in danger again. The Sephardic community once again needed to find a new home.

While a majority of the people fleeing Brazil, newly under Portuguese rule,  returned to the Netherlands, some twenty-three Jews migrated to New Amsterdam, a North American Dutch colony that later became New York. The colony’s governor, Peter Stuyvesant, was not a tolerant man. He forbade them from constructing a place of worship. However, after several protests, the newcomers succeeded in gaining permission to construct a burial ground. Nevertheless, New York was not a friendly place for Jews, and all but a few decided to leave.[5]

After their negative experience in New York, many Jews turned to Rhode Island, aware of its tradition of religious freedom.[6] Arriving in Newport in 1657, they found a friendly environment, and were able to establish a congregation.  The prosperity of these first fifteen families led to the arrival of several more from South American colonial islands like Barbados. In no time, Newport became the main destination for Jews seeking religious freedom in all of the British North American colonies.[7] They were able to construct a cemetery, and in doing so, they firmly established their roots in the Colony of Rhode Island. As Newport gained prominence as an important seaport, and the home of a bustling industry, so did the town’s Jewish population grow in prominence. As Newport grew in population and prosperity, its Jewish population, now on sound economic footing, began considering the construction of a temple for worship.  They wanted to construct a permanent home for their faith rather than worshipping privately in peoples’ homes as they had been.[8] 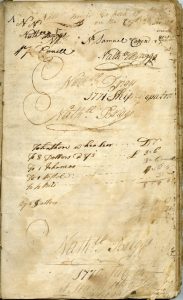 In 1759, the congregation requested funds from congregations in other North American colonies, in South America, and in England. These other congregations responded with aid for the Newport congregation and ground was broken for a synagogue in the same year.[9] On August 1st, 1759, the prosperous Newport merchant Aaron Lopez laid the building’s ceremonial cornerstone.

It was no accident that Lopez was the one to take on this ceremonial role. As the congregation’s wealthiest member, Lopez, himself an immigrant from Portugal, had made a fortune trading primarily in candles made from a waxy substance found in the head cavities of sperm whales called spermaceti. A small, but still significant part of his income came from engaging in the trans-Atlantic slave trade. These voyages picked up large quantities of enslaved Africans in places like the West Indies and the western coast of Africa. Those who survived the journey were sold for profit in ports up and down the coast of the North American colonies.[10] 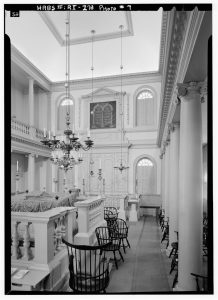 View of the inside of Touro Synagogue.
Library of Congress Prints and Photographs Division. Historic American Buildings Survey, HABS RI,3-NEWP,29–9.

Touro Synagogue was fittingly dedicated on December 2nd, 1763, the first night of Hanukkah, the Jewish holiday of light. This grand ceremony, reported on in detail in the local newspaper, the Newport Mercury, involved a ceremonial procession, during which the Torah, Judaism’s most holy book, was installed within the ark.[11]  Not only did the town’s Jewish population attend, so did many of its leading Christian citizens.[12] At last Newport’s Jewish immigrant population had a place to practice their faith freely.

Congregation: a group of people assembled for religious worship

Sephardic: an ethnicity referring to Jews originally from what is today Spain and Portugal

Treatise: a treatise is a written document that usually explains a set of beliefs or positions in detail

Forbade: banned or made illegal

How do you think the experience of having to move frequently affected the Sephardic community that eventually settled in Newport?

What is the significance of constructing a house of worship? How does it shape a community?

What does it say about life in Rhode Island in the 1700s that a Jewish community was able to freely practice their religion at a time when many places persecuted Jews and other non-Christians?

Next to The Wedding Cake House