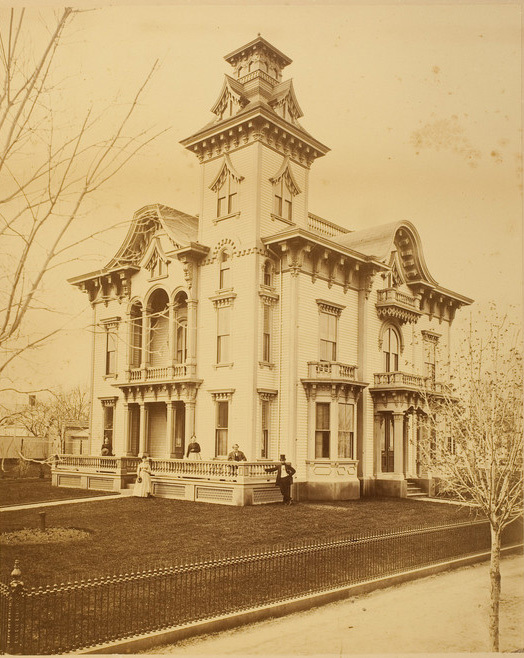 The Wedding Cake House housed A. & L. Tirocchi Gowns from 1915 until it closed upon the death of one of its founding owners, Anna Tirocchi in 1947. A. & L. Tirocchi Gowns was a successful gown-making business started by sisters Anna and Laura Tirocchi who immigrated to the United States from Italy in 1905. Today, the Wedding Cake House is home to Dirt Palace an art collective, focused on supporting female artists.

The Tirocchi Sisters: A Success Story of Immigration and Female Entrepreneurship

Sisters Anna and Laura Tirocchi operated their business, A. & L. Tirocchi Gowns, in Providence from 1911 through the 1940s. Anna and Laura immigrated to the United States in 1905 from Italy. But, prior to immigrating to the United States, Anna learned to sew by working alongside a prominent dressmaker in Rome, Italy.[1]  Anna used those skills to successfully start her own business with her sister in Providence, RI and their legacy of female entrepreneurship continues in their company’s workspace today.

Anna Tirocchi was born in Italy on October 14, 1874 and Laura Tirocchi was born in Italy on January 26, 1889.[2]  After becoming a widow, Anna and Laura’s mother moved the family from the countryside in Italy to the city of Rome so that she could work as a cook in the home of a wealthy family. The mother of the family in the household where Mrs. Tirocchi worked took an interest in Anna’s skills and connected her with a dressmaker in Italy. The dressmaker Anna worked with was known to make dresses for the wealthiest Italian women and some members of the aristocracy.[3]  Both Anna and Laura learned to be skilled seamstresses, a skill that would help them create success in Rhode Island.

As was the case with many immigrant families in the 19th and 20th centuries, the Tirocchis immigrated to join other family members who came to the United States earlier, and took time to get settled so that they could then bring in more family. Anna and Laura first arrived in New York City in 1905 and joined their family in Providence in 1907.[4]   In the early 1900s, immigrants came to Providence from many countries in addition to Italy, including Ireland, French Canada, Portugal, and Cape Verde among others. By 1910, “immigrants accounted for seven of every ten residents” in Providence.[5]

Once in Providence, Anna started  working for a dressmaker on the East Side, utilizing the skills she gained in Italy—both how to design and sew fancy dresses and how to cater to elite clientele. In 1911, Anna and Laura opened A. & L. Tirocchi Gowns. The sisters called themselves “gown makers” instead of “dress makers” to highlight the elegance of their creations, which no doubt appealed to wealthy clients.[6] 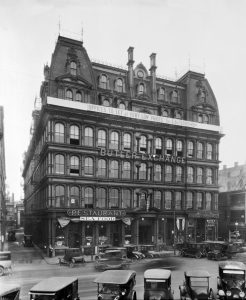 A. & L. Tirocchi Gowns was based out of the Butler Exchange Building, room 438, from its beginnings in 1911 until 1915.[7] In 1915, Laura married Dr. Louis Cella, and the couple, along with Anna, purchased and moved into a large and fancy house located at 514 Broadway Street. Today, this building is often referred to as The Wedding Cake House because it has “elaborate and plentiful bracketed ornament encrusting every architectural feature like icing on a wedding cake,” meaning that its curvy lines and unique design look like icing on a wedding cake.[8]

The House at 514 Broadway Street was perfect for the business because it allowed easy access for Tirocchi clients who lived on the East Side. Many of the Tirocchi clients liked the fancy décor of the house, and some joked that the business was nicer than their own homes.[9]  Anna worked very hard to please her clients and maintain their business. Her clients appreciated her effort. Some even referred to her as “Madame Tirocchi,” a testament to her European heritage and expertise as a seamstress.[10]

Though Anna socialized with the elite women who bought dresses from her, she also cared for her employees and family members. She was known to take in nieces and nephews, and sometimes also pay their tuition at St. Mary’s parish school. Anna also treated the women who worked for her as family members, creating beautiful wedding dresses for “her girls” for free on their wedding days.[11]

The Tirocchi sisters relied on word of mouth and personal introductions to recruit their workers, and therefore most of the women who worked for them were family, friends, or neighbors—almost all of Italian descent. The women’s shared Italian backgrounds and cultural similarities (like attendance at the same Catholic Church) allowed them to quickly form a family-like atmosphere while at work at the Tirocchi’s shop. So the Tirocchi’s were not only running a business but also creating a community-based work environment that allowed women and immigrants to settle in to life in America. Some worked for Anna and Laura for many years while others came and went, like Patricia Scalera, who opened up her own business using the skills she learned working for Anna Tirocchi.[12] This spirit of supporting female entrepreneurship and immigrants continues on at the Wedding Cake House today.

Dirt Palace describes the Wedding Cake House as a great fit for their work because “[their] project speaks to the history of the house as a famous site of a woman and immigrant owned design business through [their]feminist values and mission focused on gender and cultural equity.”[14]

The Tirocchi sisters and their business, A. & L. Tirocchi Gowns, illustrate a success story of immigration and female entrepreneurship. Their immigration from Italy to Rhode Island was crucial to the success of their business. Without the seamstress skills Anna and Laura learned in Italy, they would not have been able to operate such a successful business. Additionally, their Italian heritage is what allowed them to connect with others culturally similar to them and to support one another at a time when immigrants were often treated unfairly and sometimes had trouble finding work. The legacy of supporting female entrepreneurship, arts, and cultural equity for many groups, including immigrants, continues at the house at 514 Broadway today with the renovations and occupation of Dirt Palace in the space.[15]

Entrepreneurship – the act of starting a business

Aristocracy – the highest class of people in a society; usually those who control the government in societies with inherited titles and government roles

Seamstress – a woman who earns a living by sewing

Elite Clientele: -rich, well-known, and/or powerful customers of a business

Feminist – a way to describe a set of ideas that support equal political, economic, cultural, personal, and social rights for women regardless of their age, race, ethnicity, ability, religion, or any other identity women may have

Equity – the quality of being fair and impartial

Why do you think Anna and Laura decided to start their own business instead of working for a dressmaker that already had a business?

What challenges do you think they faced in opening their business? What were the benefits of working for their own business?

Do you think it’s significant (definition: meaningful or important) that Dirt Palace chose the Wedding Cake House for their new space? Why or why not?

Next to The Rhode Island House of Representatives